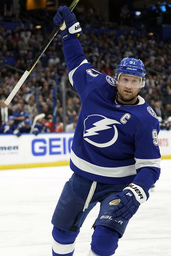 TAMPA, Fla. (AP) Brayden Point had a goal and three assists, Steven Stamkos extended his goal streak to five games, and the Tampa Bay Lightning rebounded from an early two-goal deficit to beat the Ottawa Senators 5-2 on Tuesday night.

Point has five goals and 11 points during a seven-game point streak and has a goal in three straight games. Stamkos has scored six times and added a pair of assists during his run.

"Definitely didn't start out great but I guess that's why you play 60 (minutes)," Point said. "I think our team did a good job to rally back, and get back in it."

Nikita Kucherov, Corey Perry and Mikhail Sergachev also scored for the Lightning, who moved past Florida into first place in the Atlantic Division. Andrei Vasilevskiy made 25 saves.

"We came out the way we had to, we just made some bad puck decisions that ended up in the back of our net," Senators coach D.J. Smith said.

Tampa Bay was coming off a 3-2 win Saturday night at Nashville in the Stadium Series. Lightning coach Jon Cooper said the coaching staff talked about the possibility of a slow start.

"We just played an event," Cooper said of the the Lightning's first-ever outdoor game. "To come back regardless of who we're playing, it was that potential. Give Ottawa credit, they came out hard but I like the response."

After Stamkos scored from the left circle during a power play off a back-hand pass from along the right-wing boards by Kucherov at 5:18 of the second, Perry put the Lightning ahead 4-2 with 3:52 to go in the period.

The Lightning are 14-10-2 when their opponent scores first.

Tampa Bay tied it at 2 when Kucherov scored on a back-hander 7:15 into the first and Point beat Murray from the left circle with 5:11 left in the period.

Kucherov has both a goal and an assist in four consecutive games.

Ottawa beat Vasilevskiy on its first two shots as Ennis and Sanford scored in the opening 3:43. Ennis stopped a 13-game goal drought with a nifty redirection of Thomas Chabot's blue-line shot at 1:11.

Sergachev snapped a 40-game goal drought midway through the third.

Stamkos moved past Jean Beliveau and Ray Bourque into sole possession of 30th place all-time with his 174th power-play goal. Next on the list are Michel Goulet and Mark Messier, who are tied with 179. ... Ottawa center Colin White had an assist and has two points in two games after missing the first 50 games of the season with a shoulder injury. ... The Lightning are 14-1-2 at home since Nov. 21. ... There were several scrums with both teams getting penalized 10 times, including a pair of fighting majors.

Senators: Chabot and fellow defenseman Nikita Zaitsev returned after missing one game with a non-COVID-19 illness. Chabot lost 13 pounds over two days, while White was was sick for 48 hours and ate just toast before the game. "That's my only food today," White said. "We probably have eight, nine guys get sick from this. I thought everyone of the guys battled hard tonight." ... Ottawa canceled practice Monday because just over one-third of its players were ill.

Lightning: Defenseman Erik Cernak, who left Saturday's game early after getting hit in the head on a check, played.

Senators: Play the second of a five-game trip Thursday night at Florida.