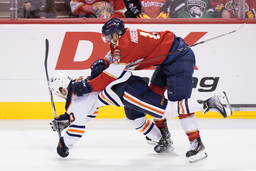 After goalie Mikko Koskinen denied Mason Marchment's shot on a 3-on-1 break near the end of the second period, Ryan tapped in a pass from Evander Kane for the hat trick and a 4-2 lead.

"Getting my first hat trick at the ripe age of 35 feels pretty good," said Ryan, who was then told he was the oldest Oiler to post a three-goal game. "I'll put that on the wall, eh?"

Leon Draisaitl netted his team-leading 36th goal, and Connor McDavid had two assists for Edmonton, which is 6-2 under new coach Jay Woodcroft.

"The move to the right wing has rejuvenated him, and he's good in the face-off circle," Woodcroft said. "I think he has underrated skill. Sometimes you need unusual suspects to step to the front.

"For (Ryan) to get those goals, man, the room was super excited for him."

Koskinen made 44 saves, including a key point-blank stop of Carter Verhaeghe on a breakaway midway through the third period, and a glove save on Aleksander Barkov with 4:22 remaining.

"We found a way to win," Woodcroft said, "but we don't do that unless Mikko turns in that performance he did today."

Added Panthers interim coach Andrew Burnette: "You tip your cap. He made some unbelievable saves. I thought he was excellent."

Barkov scored twice, Anton Lundell produced a goal, and Anthony Duclair had two assists for the Panthers, who have lost three consecutive games for the second time this season. Sergei Bobrovsky stopped 18 shots.

In their first meeting in South Florida since February 2020, Edmonton's offense could not get on track early and did not have its first shot until McDavid put one on goal at 9:43.

But 31 seconds later Ryan put the visitors up 1-0 when he finished an odd-man rush, taking a pass from Warren Foegele and beating Bobrovsky.

Florida evened it when its third line scored at 11:50. Frank Vatrano fed a pass between his skates to Lundell, who got his 12th from in tight.

The hosts grabbed their first lead on the game's opening power play, with Barkov pushing in a goal off a rebound of Duclair's shot.

Edmonton's Ryan Nugent-Hopkins was injured in the first period and did not return.

"They came pretty hard," Koskinen said. "Lots of shots at the net. We were happy to be down one goal after the first."

"I felt I made the right reads at the right time, and that made it much easier. I have to trust my reads, and today they were strong."

In the second period, Ryan's second goal knotted the game at 2, and Draisaitl's power-play goal put the Oilers up for the second time.

Barkov's team-leading 25th on the power play cut it to 4-3 with just over four minutes to go, but he said his team needs to push harder.

NOTES: McDavid's appearance on the ice in Sunrise was his first since Nov. 8, 2018. The reigning NHL MVP missed Edmonton's game at the Panthers in February 2020 due to a quad injury. The clubs did not meet last season because of the COVID-19-impacted schedule. . Florida won the first meeting 6-0 in Edmonton behind Bobrovsky's 40 saves on Jan. 20. . The Oilers are 16-0 when scoring first. . Florida defenseman Lucas Carlsson and forward Ryan Lomberg returned to the lineup after missing Thursday's game. . Both teams are on five-game sets. Edmonton will play three more on the road: at Carolina, Philadelphia and Chicago. The Panthers will round out their five-game homestand with matches against Ottawa and Detroit.

The Oilers visit Carolina on Sunday.

The Panthers host Ottawa on Thursday.