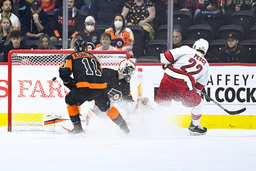 PHILADELPHIA (AP) Despite not being at their best, the weary Carolina Hurricanes were good enough to get another win.

Brett Pesce scored 4 minutes, 42 seconds into overtime, Vincent Trocheck had a goal and an assist and the Metropolitan Division-leading Hurricanes defeated the Philadelphia Flyers 4-3 on Monday.

Nino Niederreiter and Teuvo Teravainen also scored for the Hurricanes, who won their third straight while playing their third contest in four days.

"It wasn't a great game by us, but you're not going to have beautiful games every night," Carolina coach Rod Brind'Amour said. "We just didn't have it, you can tell. The fact they still found a way says a lot about our guys."

The game appeared headed for a shootout at the expiration of the five-minute 3-on-3 session before Trocheck's pass on a 2-on-1 was corralled out of the air by Pesce, who shot high over Martin Jones for his fourth of the season.

"It's a good feeling, for sure," Pesce said.

Hurricanes goalie Frederik Andersen made 38 stops, including a stellar save late in overtime on Cam Atkinson.

"Surprised? No. But thankful? Absolutely," Carolina's Jaccob Slavin said. "Nice to have him back there."

Gerry Mayhew, Patrick Brown and Oskar Lindblom tallied goals for the Flyers. Philadelphia, playing its second contest of a club-record eight-game homestand, lost its fifth in a row and 18th in the past 20.

It was the second straight close defeat against an Eastern Conference top-tier team, following Thursday's 5-3 loss to Washington in which Philadelphia gave up three goals in the final 3:51.

"I think it's been like this lately," Lindblom said. "Some games we've been playing well and we have a chance to win, but we find a way to lose somehow. Played pretty well, but we need to find a way to win. That's the only thing that matters in this sport."

Trocheck netted his 14th of the season with 12:45 left in regulation on a backhand from close range to put the Hurricanes on top 3-2. The Flyers tied it at 3 with 4:53 left in the third when Travis Konecny's shot deflected off Lindblom's skate and past Andersen.

Brown, in his first game since Jan. 8 because of a knee injury, made it 2-2 with 14:41 left in the third. Isaac Ratcliffe set up the goal with a wraparound pass from one side of the crease to Brown.

The Canes managed just two shots in a lackluster first period. But the game was scoreless, as the Flyers couldn't convert any of their 11 shots.

"We were terrible to start," Brind'Amour said. "You could tell we didn't have a lot of energy, a lot of juice, but these guys dig in."

Carolina picked up its game in the second period - and got a little luck to get going. Jesper Fast sent a backhand along the boards toward the back of the net, but the puck caromed off the side boards right to the front of the net.

Niederreiter was there all by himself, and he pushed the puck in for his 15th of the season to put the Canes up 1-0 just 24 seconds into the period.

Philadelphia got its own good fortune while tying the contest just 35 seconds later when Mayhew's attempted pass to the crease deflected off the stick of Carolina's Sebastian Aho and past Andersen. It was the third goal in two games for Mayhew, who's in the lineup because of a litany of Flyers injuries.

Teravainen extended his points streak to six consecutive games with 7:47 left in the period when he finished from close range after a good pass from Andrei Svechnikov. Aho earned his team-leading 53rd point with an assist on the play.

Hurricanes: D Brendan Smith was with the team but didn't play. Smith took a puck to the ear in the first period of Sunday's 4-3 win at Pittsburgh that required a trip to the hospital. Brind'Amour said before the game that Smith is day to day and would be evaluated further when the team returns to Carolina on Tuesday. ... Tony DeAngelo suffered an upper-body injury in the second period and didn't return.

Flyers: G Carter Hart was a game-day scratch because of an eye infection. ... D Rasmus Ristolainen returned to the lineup after a three-game absence because of an upper-body injury.