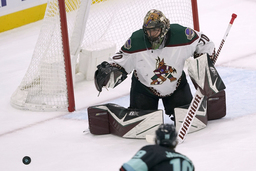 They learned Wednesday night that Vejmelka can rebound from a bad performance and look terrific in the second half of a back-to-back.

Vejmelka made 34 saves, Nick Schmaltz scored twice including a clinching empty-net goal in the final minute, and the Coyotes beat the Seattle Kraken 5-2.

"He is capable of unbelievable performance," Arizona coach Andre Tourigny said. "So we were really confident to be honest today."

Phil Kessel and Anton Stralman both scored as Arizona built a 3-1 lead, and Alex Galchenyuk added an empty-net goal with 1:37 left after Seattle pulled to 3-2. The Coyotes rebounded from a lopsided loss in Vancouver a night earlier to knocked off Seattle for the second time this season.

The Kraken are the only team Arizona has beaten twice this season.

"I thought we did a good job making plays with the puck and holding on to it, and getting a little more traffic than we did last night in front of the net and create a little more chaos in their end," Schmaltz said. "Obviously our goalie was really good tonight as well."

Vejmelka was terrific most of the night and appeared on track for his second shutout of the season through two periods. Seattle rallied in the third as Colin Blackwell scored early in the period, and Calle Jarnkrok scored into an open net off a great pass by Yanni Gourde with 4:08 left.

But that was all Seattle would get. Both Kessel and Galchenyuk finished with a goal and an assist for the Coyotes.

Vejmelka also got some help with shots by Vince Dunn and Mark Giordano hitting the post in the first period and staying out. But when he needed to make a big save, Vejmelka was up to the task. He robbed Gourde open at the back post in the first period and denied Jarnkrok later in the period, although Vejmelka took a quick glance at the goal to see if the puck slipped through.

His best save came midway through the second period when Vejmelka made a lunging stop on Jordan Eberle's chance on a 2-on-1 break.

Seattle goalie Philipp Grubauer made 22 saves but was left in a difficult position on the three Arizona's goals he allowed.

"In reality, each of the three goals tonight we just, we weren't sharp, we weren't clean with the puck," Seattle coach Dave Hakstol said.

Kessel scored his sixth of the season at 4:07 of the first taking advantage of a bad turnover by Adam Larsson and swerving around Grubauer to score. Schmaltz's sixth goal came on a breakaway midway through the second period and beat Grubauer high on the glove side.

Blackwell scored 16 seconds into the third period for Seattle with a rising wrist shot, but the Coyotes' two-goal advantage was quickly restored as Stralman flipped a backhanded shot past Grubauer at 1:52 of the third.

"There's two key plays in the game for me. There's the save (Vejmelka) made on the odd-man rush in the second period, and there's that goal of (Stralman). I think those were key moments," Tourigny said.

NOTES: Seattle claimed D Dennis Cholowski off waivers and assigned him to Charlotte of the AHL. Cholowski was originally selected by Seattle in the expansion draft but was claimed off waivers by Washington in October. ... Arizona G Scott Wedgewood missed his second straight game. ... Galchenyuk now has a point against all 32 teams in the league. ... Seattle D Jamie Oleksiak was activated from the injured list but was scratched. Oleksiak (lower body) has missed the past nine games.

Kraken: Seattle is at Anaheim on Friday.