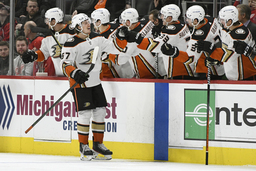 Dylan Larkin had a goal and an assist to help Detroit win for the second time in six games. Alex Nedeljkovic, starting for the 10th time in 11 games, had 14 saves.

In the extra period, Oesterle one-timed a feed off a faceoff from Larkin for his first goal with the Red Wings.

"It was a pretty surreal moment," Oesterle said. "Obviously, I didn't know when I would get my first goal here or what it would be like, but it was really special to have it be an overtime winner at home with my family and friends in the crowd."

"I'm happy for him - I'm sure that was pretty cool for him," Blashill said. "Obviously, he's not new to the NHL, but being a Detroit kid and scoring an overtime winner for your first goal with the Red Wings has to be awesome."

"We don't love giving up a point, obviously, but we played five games in eight days,," said Anaheim coacah Dallas Eakins, who flew to Detroit on Wednesday after missing several games due to COVID-19 protocols. "We have guys who are banged up. This break is welcome. Even though we gave up a point, our guys should be ;holding their heads up, playing in three time zones and find a way to battle to get some points."

The Red Wings appeared to have broken a 1-1 tie late in the third period, but Filip Hronek was denied a goal when the referees determined he had kicked the puck into the goal past Gibson.

Larkin scored his team-leading 23rd goal of the season late in the first period, and Rakell tied it with his 10th of the season early in the second.

" I thought we came out in the first period and played the way we need to play," Blashill said. "We managed the puck well and we got it in behind them, so we didn't have to defend much."

Detroit defenseman Nick Leddy suffered an upper-body injury and did not return for the third period.

NOTES: The game ended a five-game road trip for the Ducks, tied for their longest of the season. ... Detroit goalie Thomas Griess was in uniform for the first time since Jan. 9. He had been ut due to Covid-9 protocols. He backed up starter Nedeljkovic. .. Rakell's goal, the 148th of his career, lifted him into sixth place on Anaheim's all-time goal-scoring list, breaking a tie with Bobby Ryan.