Sundqvist has a goal and assist, Blues beat Blackhawks 5-1 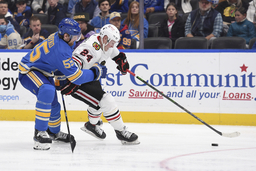 ST. LOUIS (AP) Oskar Sundqvist had a goal and an assist, and the St. Louis Blues beat the Chicago Blackhawks 5-1 on Saturday night.

David Perron, Dakota Joshua, Vladimir Tarasenko and Jordan Kyrou also scored for the Blues, who are 6-0-2 in their last eight games against the Blackhawks. Ville Husso made 15 saves.

"If you look up and down our lineup, all our lines can score," Sundqvist said. "I think we kind of proved that tonight. I we need to keep doing that. We need everybody to contribute."

Dylan Strome scored and Marc-Andre Fleury stopped 26 shots for the Blackhawks, who lost for the fourth time in their last five games.

"We knew it was going to be a challenge, but that's not good enough," Blackhawks interim coach Derek King said. "I got to watch my words here, but we just can't do that. You can't put an effort like that out and expect maybe steal a game from somebody. That's not going to happen."

Perron's power play goal at 8:19 of the first period gave the Blues a 1-0 lead. Brayden Schenn had an assist on the goal to extend his points streak to four games (three goals, three assists).

Joshua extended the Blues' lead, tucking in a backhand on a rebound off Torey Krug's slap shot with 8:29 left in the first. It was Joshua's second of the season and first since Dec. 11.

"It was a good effort," Blues coach Craig Berube said. "I thought we played hard. We were on the same page tonight for three periods. I thought the second period got a little harried with all the penalties, but overall, a good performance by everybody."

Strome's power-play goal at 2:37 of the second cut the Blues lead to 2-1. Strome has five goals and nine points in his last six games.

"Not our best effort," Strome said. "Got to find a way to go into Winnipeg and salvage a decent road trip. Not our best game, left (Fleury) out to dry."

Tarasenko restored the Blues' two-goal advantage with 41 seconds left in the second set up by a slick between the legs pass from Robert Thomas.

"Goals before the intermission are always important," Tarasenko said. "I'm happy to have that one and I think it gave us some confidence before the third period."

"When we're skating and working as hard as we did tonight it's easier on our `D' too to stand up and get the pucks back," Sundqvist said. "I think a lot of stuff worked really well tonight."

While he faced just 16 shots, Husso made several highlight-reel saves including going post-to-post to rob Patrick Kane late in the first period and he did it again to thwart Seth Jones' one-timer in the third.

Husso entered the game with a league-best 1.90 goals-against average and .941 save percentage.

"They found a way to make it difficult for us so that we passed up a lot of shots, myself included," Strome said. "I don't really know what we finished with, but midway through the third we only had 14 shots, so it's really not enough to create a lot of chances."

FACE IN THE CROWD

Rapper and St. Louis native Nelly attended the game and made a cameo appearance on the video board in the third period.

NOTES: Blues D Marco Scandella was scratched after suffering a lower body injury against New Jersey on Thursday and was replaced in the lineup by D Jake Walman. It was the first game missed this season for Scandella ... Blackhawks RW Patrick Kane needs two assists to tie Denis Savard (719) for second in franchise history. . Blues LW Brandon Saad, a former Blackhawk, is a goal away from 200 career goals.

Blackhawks: At Winnipeg on Monday night.

Blues: At Ottawa on Tuesday night.