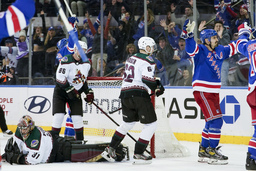 NEW YORK (AP) Chris Kreider had a hat trick to set his career high with 29 goals, tying for the NHL lead, and the New York Rangers scored six unanswered to beat the Arizona Coyotes 7-3 on Saturday night for their eighth win in 11 games.

Rangers defenseman Jacob Trouba scored twice as New York improved to 12-3-2 at home and recovered from an early 3-1 deficit after being outshot 16-4 in the first period by the last-place Coyotes. On Friday night, the first-place Rangers lost 6-3 at division-rival Carolina and returned to New York in the wee hours of the morning.

"A wild 48 hours for us. It took a little bit to get our legs and our momentum going,? Trouba said. "Good composure between periods. We stuck with it. It's good to be able to do that."

Igor Shesterkin made 25 saves for his sixth straight win and 10th victory in 11 games, improving to 19-4-2 this season.

Kreider scored short-handed at 11:30 of the second period to cut the deficit to 3-2 before Julien Gauthier tied it at 15:22 with his third goal of the season and first since Dec. 14.

"The short-handed goal was huge for us,? Rangers coach Gerard Gallant said. "It was definitely a momentum change for sure."

Artemi Panarin put the Rangers ahead on the power play with his 11th goal at 16:33 of the second before Kreider scored again at 18:42 of the middle period to match his previous career high of 28 goals, which he had accomplished twice.

The 30-year-old forward completed his fifth career hat trick on the power play at 10:06 of the third period. Kreider has 14 power-play goals and eagerly credited his teammates for his scoring prowess, which has him on pace for a 57-goal season. He has scored eight times in the last five games.

"Guys are getting pucks to the net when I'm there,? Kreider said. "There are so many good guys up and down the lineup who can create and manipulate passing lanes ... some of the best players in the world."

Kreider has 10 goals in his last nine games and even had the NHL lead to himself for a little while - until Alex Ovechkin scored twice in the third period for Washington against Ottawa to give him 29 goals as well.

"We feel good as a group," Kreider said.

Coyotes forward Liam O'Brien opening the scoring at 2:29 of the first when he beat Shesterkin for his second goal of the season.

Trouba tied it less than a minute later at 3:15 with assists from Kreider and Mika Zibanejad.

Andrew Ladd put the Coyotes up 2-1 at 6:56 with his sixth goal. Clayton Keller made it 3-1 at 7:03 of the second when his shot fluttered past Shesterkin for his team-best 15th goal.

Then the Rangers went to work against Coyotes rookie goaltender Karel Vejmelka, who had won his last three road games before meeting the high-flying Rangers.

The Czech-born Vejmelka made 14 saves on 20 shots before he was replaced by Scott Wedgewood at 1:33 of the third after Trouba scored his second of the game and eighth goal of the season.

"He has been a superstar for us,? Coyotes coach Andre Tourigny said of Vejmelka, who has six of Arizona's 10 wins. "We wish we had helped him better tonight and bailed him out. It didn't happen."

Zibanejad, who also assisted on Panarin's goal along with Adam Fox, has an eight-game point streak with four goals and six assists during that span.

Fox, who leads the Rangers with 45 points, including seven goals, has 12 assists in his last 10 games.

Both teams played the previous night on the road, with the Coyotes coming off a 4-0 loss to the New York Islanders.

Gallant, 58, said before the game that as a young player growing up in Canada, he idolized Islanders Hall of Fame left wing Clark Gillies, who died Friday at 67.

"He was my favorite player and they were my favorite team as a kid growing up," Gallant said. "When I was playing bantam hockey, I wanted to be Clark Gillies - score and fight."

Coyotes forward Phil Kessel skated in his 940th consecutive game, the second-longest active streak in the league. Philadelphia defenseman Keith Yandle has played in 963 straight games, one shy of the NHL record held by Doug Jarvis.

NOTES: It was the first game for the Coyotes at Madison Square Garden since Oct. 22, 2019, a 3-2 overtime win. . The Rangers won the previous meeting this season, 3-2 on Dec. 15 in Arizona. . Rangers forward Kaapo Kakko was a late scratch with an upper-body injury. . New York also scratched defensemen Jarred Tinordi and Libor Hajek. . The Rangers will play four of their next five games at home before the All-Star break. . The Coyotes scratched Ryan Dzingel, Antoine Roussel and Dysin Mayo.