Kings hold off late charge by Rangers for 3-1 win 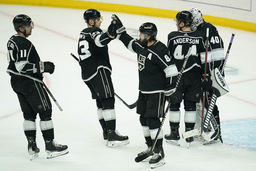 Trevor Moore had two assists and Cal Petersen made 22 saves for the Kings, who have won four of five.

"You're either in repair mode or you're in advance mode, and when you're winning you're advancing," coach Todd McLellan said.

Mika Zibanejad had a goal and Alexandar Georgiev made 36 saves for the Rangers, who have lost two of three to start their longest road trip of the season.

Kris Knoblauch served as temporary coach for New York after Gerard Gallant tested positive for COVID-19 on Sunday. Knoblauch, who coaches the Rangers' AHL affiliate, took a red-eye flight from Hartford, Connecticut, and arrived in Los Angeles at 2:30 a.m. Monday.

"He's asking us to play the exact same way and it's on us as a group to do those things," Rangers forward Chris Kreider said. "I think that a very recurring theme when things go sideways for us is we're really hurting ourselves, and we did that a lot tonight I think."

The Kings came out buzzing in the second period, scoring twice in the opening 3:41. Danault got his seventh goal on a backhand chip following up Moore's shot 55 seconds in, and Lizotte put in the rebound of Viktor Arvidsson's sharp-angle shot for the 2-0 lead.

Kreider said the Rangers were frustrated by the Kings' 1-3-1 alignment in the neutral zone, which led to two easy chances off the rush that Los Angeles cashed in.

"I think that's what you saw at the beginning of the second period, and ultimately, it's on us to settle down and regroup and commit to doing the right things to advance the puck and play the right way," Kreider said. "We did that a little bit too late when we'd already given up the lead at that point. You didn't nip it in the bud early in the game, so it's on us. It's on me."

Zibanejad got to the edge of the crease for a redirect of a pass from Filip Chytil to pull the Rangers back within 2-1 with less than eight minutes remaining in the third. But Kempe scored into an empty net with 1:17 remaining to seal it.

"You look at our last couple games, we've played some teams that were pretty, pretty hot coming in," Lizotte said. "We beat some pretty good teams that were playing good hockey, so it's huge confidence for our group."

Moore continued his strong play in an elevated role since the holiday break, including picking up the secondary assist on Lizotte's fourth goal.

Moore found himself on the second line because Danault, Alex Iafallo and Dustin Brown all had stints in COVID-19 protocol, and the 26-year-old Southern California native has made the most of his promotion with three goals and five assists in his past six games.

"We have some responsibility for his lack of production, the coaching staff, because we played him everywhere. He was a center, he was a left wing, he was a right wing. He was on the top line, he was on the fourth line," McLellan said. "I think finding a home on a line has been good for him."

Just when Jonathan Quick had laid claim to being the starter in net, Petersen has a .977 save percentage and 0.50 goals-against average in his past two starts after going more than a month without playing.

"Just like `Quickie' wasn't gonna hand the keys to the kingdom over to Cal, Cal's gonna fight to get them back, and there's no better situation than that," McLellan said.

Both teams had key players return after being on the virus list: New York's Artemi Panarin (missed four games) and Iafallo (missed two). ... Danault has three goals and two assists in his past four games. . Zibanejad has two goals and an assist during a three-game point streak. . Rangers F Barclay Goodrow was placed in COVID-19 protocol Monday.