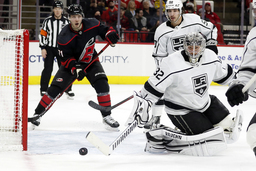 RALEIGH, N.C. (AP) A revamped lineup hasn't slowed down the Carolina Hurricanes. They're still clicking at an impressive pace.

Jesperi Kotkaniemi and Jesper Fast scored in the opening two minutes and they each added an assist as the Hurricanes beat the Los Angeles Kings 5-1 on Saturday night.

The Hurricanes have won both games since their roster was rearranged because of COVID protocols with the top two scorers and captain among those sitting out. Carolina had five players appearing in no more than their third NHL game of the season in the lineup against the Kings.

"That's big-time," Hurricanes coach Rod Brind'Amour said. "I just think guys are working really hard. Kudos to all the guys really that came in because they all contributed."

Prior to Saturday's game, the Hurricanes learned that Sunday's home game vs. Nashville and Tuesday's game at Boston have been postponed because of COVID outbreaks on those teams. Carolina's schedule has been in flux since a game at Minnesota on Tuesday night was postponed based on the Hurricanes' COVID situation.

Even losing forward Martin Necas to an upper-body injury after he had only about three minutes of ice time Saturday didn't derail the Hurricanes. Newcomers have done their part.

"It's pretty impressive," Kotkaniemi said. "Guys come up and play on that level, that's crazy. We can trust those guys."

"What didn't they do well?" McLellan said. "They were quicker, harder, faster, more determined. . If you're in the NHL, you belong here. We knew we'd have our hands full."

Blake Lizotte scored late in the second period in his second game back for Los Angeles after a five-game absence due to COVID protocols. The Kings, who had a four-game points streak snapped, have failed to score more than one goal in six of their 29 games.

Jonathan Quick made 28 saves for Los Angeles after going six straight starts without a regulation loss at 4-0-2. He gave up more than three goals for the third time this season.

"It kind of seems the bounces don't go your way when you're down that quick," Lizotte said.

RIGHT BACK AT IT

"We're making good plays together," Drury said. "When everyone is rolling, I think everyone builds confidence off that. All the guys who have come up from Chicago (of the American Hockey League), I think we have molded in nicely."

Drury is the fifth player in franchise history with a goal in each of his first two games.

The Hurricanes have three players with that distinction across a five-season span. Warren Foegele did it in March 2018 and Morgan Geekie pulled it off in March 2020. Both those players are now in other organizations.

The Kings put goalie Cal Petersen on the COVID list earlier Saturday. That meant Jacob Ingham from the Greenville Swamp Rabbits of the ECHL was summoned to be the backup. Quick ended up playing in a fifth straight game for Los Angeles.

At least Lizotte might be getting on track. He posted his second goal of the season.

"You get kind of your legs back," Lizotte said. "It's nice to score again, for sure."

Kings: Sunday at Washington to finish a four-game road trip.

Hurricanes: With Sunday's home game vs. Nashville postponed and Tuesday's game at Boston called off, the next game is slated for Thursday night at Ottawa.