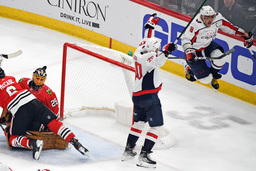 CHICAGO (AP) Caleb Jones saw the puck just sitting there, right in front of the net. And he pounced.

"Kind of just had that feeling, you better not miss this," Jones said.

Jones scored his first goal of the season 1:21 into overtime, and the Chicago Blackhawks beat Alex Ovechkin and the Washington Capitals 5-4 on Wednesday night.

Washington tied it on Conor Sheary's sixth goal with 3 seconds left in regulation. But Jones knocked home a rebound as Chicago improved to 6-0 under interim coach Derek King when the game goes beyond regulation.

"Guys are believing in themselves," King said. "They believe even if we get to overtime against a good hockey team we can win."

MacKenzie Entwistle and Philipp Kurashev also scored for the Blackhawks, who beat the Capitals 4-3 in a shootout on Dec. 2. Brandon Hagel had two assists, and Marc-Andre Fleury made 42 saves.

Ovechkin, Eller and Sheary each had a goal and an assist for the Capitals, who had won three of four. Daniel Sprong also scored, and T.J. Oshie had two assists.

"It was nice that were able to battle back at the end of the game and get that one point, but we left one on the table, too," coach Peter Laviolette said.

Washington center Nicklas Backstrom picked up an assist in his first game after missing the start of the season with a hip injury. But the Capitals played without Evgeny Kuznetsov because of the NHL's COVID-19 protocol.

"Everything felt good," Backstrom said. "The hip felt good. It's just that I haven't played a game in a while, so it's going to take a couple of games to get my timing back and stuff."

Washington jumped in front on Ovechkin's team-high 21st goal 3:36 into the second. With Chicago captain Jonathan Toews in the box for hooking, Ovechkin fired a shot from the left circle past Fleury on the goaltender's stick side.

The Blackhawks bounced back behind their power play, which was just 5 for 48 in the previous 19 games.

Patrick Kane got his 700th career assist when DeBrincat converted a 5-on-3 opportunity at 13:55, tying it at 1 with his team-high 15th goal. Kurashev put Chicago in front with another power-play goal, and Entwistle finished the scoring flurry when he knocked in a backhand for a 3-1 lead at 14:29.

It was Kurashev's first NHL goal since April 12 at Columbus. Entwistle scored his third of the season in his first game with Chicago since he was sidelined by a left ankle injury.

"It was nice to hear the building that loud. It was awesome," DeBrincat said. "That helps a lot when you can get that momentum and keep going like that."

The Blackhawks honored Fleury after he became the third goaltender with 500 career wins when he made 27 saves in a 2-0 victory at Montreal last week.

Martin Brodeur and Patrick Roy, the other two members of the distinguished club, congratulated Fleury in a pregame video, and Kevin Lankinen, the backup goaltender for the Blackhawks, presented Fleury with a specially designed mask.

"It was a very special day for me," Fleury said.

Blackhawks forward Henrik Borgstrom was placed on injured reserve because of a non-COVID-19-related illness. The move was made retroactive to Friday.

"It's nothing serious. ... It just made sense for him to not rush him back," King said.

King also said forward Kurtis Gabriel was expected to get into the country Wednesday and could play for the Blackhawks this weekend. Gabriel was acquired last week in a trade with Toronto, but has been held up by a visa issue.

Capitals: At the Winnipeg Jets on Friday night.