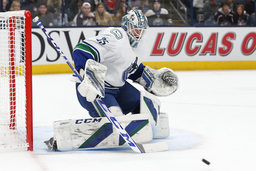 VANCOUVER, British Columbia (AP) Thatcher Demko made 30 saves and Bruce Boudreau won his first game as coach of the Vancouver Canucks in a 4-0 victory over the Los Angeles Kings on Monday night.

Demko earned his first shutout this season and the second of his career. Brock Boeser and J.T. Miller each had a power-play goal and an assist. Conor Garland and Juho Lammikko also scored for the Canucks, who had lost 10 of 13.

"I'll get to know the players more, but it's four new lines thrown at you, sometimes it's a bit of a whirlwind," Boudreau said. "But it was fun. I had a lot of people on the bench to help me."

Boudreau, who previously coached the Capitals, Ducks and Wild, was hired through the 2022-23 season. He had a meeting and a 30-minute morning skate with his players before the game and left them with a simple message.

Special teams have been a struggle for the Canucks (9-15-2) this season, but Vancouver went 2 for 4 on the power play and successfully weathered two penalties.

The Kings' Lias Anderson was called for high-sticking on Oliver Ekman-Larsson midway through the third period and Miller capitalized on the man advantage. His shot from inside the faceoff circle careened into the net off the crossbar with about seven minutes left to make it 4-0.

Lammikko gave the Canucks their third goal 6:59 into the period, picking off an errant Kings pass and putting a shot past Petersen stick-side for his first goal in a Vancouver jersey. The 25-year-old left wing was a healthy scratch in the previous five games.

The Canucks went up by two 5:43 into the second after rookie Vasily Podkolzin put a shot wide and the puck ricocheted off the end boards. Garland picked up the rebound behind the net and wrapped it into an open side before Petersen could get back in position.

A power-play goal opened the scoring early in the second after Los Angeles' Mikey Anderson was called for tripping Bo Horvat. Stationed at the goal line, Tanner Pearson sent a pass to Boeser at the top of the faceoff circle. The right wing uncorked a snap shot and the puck deflected in off the skate of Kings defenseman Drew Doughty in front.

The goal was Boeser's fifth of the season and first in 14 games.

"It's funny how the games worked over this drought where I haven't scored goals: I felt I got some pretty good chances, hit posts, crossbars, and then that's the one that goes in," Boeser said. "It's crazy how this game works, but at the end of the day it went in tonight and I'll take it. I've just got to continue to build and keep shooting the puck."

It was the first time Kings defenseman Alex Edler returned to Vancouver since signing with Los Angeles in July. The 35-year-old played 15 seasons in Vancouver and holds several franchise records for the Canucks, including most games played by a defenseman (925), and most goals (99), assists (310) and points (409) by a defenseman.

The club recognized Edler with a video tribute early in the first period, and the veteran blueliner hopped over the boards to wave to the cheering crowd.

Edler thought his former team got a boost from its new bench boss.

"I think they came out hot and we were expecting that. We talked about that," he said. "With a new coach, you want to make a good first impression, so they came out hard, they played hard and didn't really give us a lot of room and we were just a step behind."

NOTES: Boudreau won the Jack Adams Award as the NHL's top coach with Washington in 2008. . Garland has eight goals this season. Miller leads the Canucks with nine. . Vancouver extended its win streak over Los Angeles to six games.