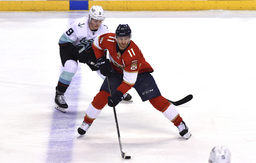 The streak ended Saturday - and Driedger was the winning goalie again.

Driedger made 33 saves against his former team, helping the Seattle Kraken defeat Florida 4-1 on Saturday night to deny the Panthers what would have been a record-setting 12th consecutive home win to start the season.

"Honestly it was a bit of a challenge trying to just keep my head in the game," Driedger said. "And, you know, it's so familiar being in this barn. Just seeing those guys on the other side of the ice is a bit different."

Jordan Eberle scored twice in his 800th game, Ryan Donato and Jamie Oleksiak added goals and Joonas Donskoi had two assists for the Kraken, who were facing the Panthers for the first time.

Patric Hornqvist had the goal for Florida, and Spencer Knight stopped 23 shots for the Panthers.

Florida was bidding to become the first team in NHL history to start a season 12-0-0 at home; the Panthers will merely have to share the record of 11 consecutive home-ice victories to open a season with Chicago, which had such a start in 1963-64.

"We all know what was at stake tonight, but it's behind us now," Panthers forward Owen Tippett said.

And there was some irony that Driedger - who was picked up by Seattle in the expansion draft on July 21, after the Panthers left him unprotected - was the goalie who came out of the visiting dressing room to get the streak-snapping win.

"We won start to finish tonight and we really needed to do that, especially in this building against this team," Kraken coach Dave Hakstol said. "They hadn't lost in this building yet this year, so it was a good 60-minute performance for us."

Florida's home-ice winning streak started on April 24, a night when Driedger made 16 saves to help the Panthers beat Carolina in overtime. He was 21-8-4 in his time with the Panthers with 2.07 goals-against average, but became expendable with Sergei Bobrovsky locked in as Florida's No. 1 goalie and Knight emerging last year as the team's netminder of the future.

"I'm sure it meant a lot to him," Eberle said. "It's funny, with the scenario that we're in, every night is going to mean a lot to a lot of guys on this team."

Seattle gave Driedger the lead just 2:22 into Saturday's game, and never trailed. Eberle opened the game with a power-play score and Donato's ninth of the season midway through the opening period put Seattle up 2-1.

It stayed that way until the third, when Eberle struck again at 5:57 with the insurance tally. And before long, Florida's pursuit of the outright record - not to mention the sixth-longest home-ice winning streak in NHL history, when going back to last season - was over.

"There was a lot of buzz coming back into this building," said Driedger, who went to the Florida dressing room to visit with some former teammates after the game. "Felt really good to get that one. Pretty happy with that performance by our group. That's about as good as I've seen our group play, so hats off to them."

Florida forward Joe Thornton's first-period assist was the 1,532nd point of his career, breaking a tie with Paul Coffey and giving him outright possession of No. 13 on the NHL's all-time scoring list. Thornton is the leader among active players and now one point shy of No. 12 Mark Recchi.

NOTES: Panthers captain Aleksander Barkov (knee) missed his fifth consecutive game and forward Anthony Duclair (lower body) was out for a second consecutive Florida contest. ... Florida's first trip to Seattle is Jan. 23, the fourth game of a five-game swing that also includes stops in Calgary, Edmonton, Vancouver and Winnipeg. ... Seattle ends its current trip with games at Buffalo on Monday and Detroit on Wednesday. Those are the last games the Kraken will play in the Eastern time zone until Jan. 27.