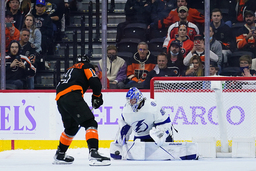 PHILADELPHIA (AP) Steven Stamkos and Brayden Point each scored in the shootout and regulation to lift the Tampa Bay Lightning to a 4-3 win over the Philadelphia Flyers on Thursday night.

Mathieu Joseph also scored in regulation for the two-time defending Stanley Cup champion Lightning, who have won seven of nine. The Lightning came back from a 2-0 hole.

"We stayed with it," Tampa Bay coach Jon Cooper said. "I didn't like our start. I knew we had more in us. We picked it up as the game went on."

Claude Giroux scored twice and Travis Konecny also had a goal for the Flyers, who have lost eight straight regular-season games to Tampa Bay.

Stamkos and Point beat Flyers goalie Carter Hart on the blocker side in the tiebreaker, and Philadelphia's Sean Couturier and Giroux couldn't convert.

It looked like the Lightning had won it in regulation when Stamkos netted his team-leading ninth goal from a sharp angle with 1:56 left in the third. Hart couldn't come up with a seemingly routine save as the puck wiggled through his equipment and just over the goal line.

Hart said there was a problem with his pads.

"Equipment malfunction there," he said. "They usually should be sealed. I used (these) pads four times. Expect that from older sets. Something I'll look into."

Giroux netted his second of the game with 8.1 seconds left to force overtime. Derick Brassard won a faceoff back to Giroux, who fired a long wrist shot past the blocker side of Lightning goalie Andrei Vasilevskiy.

"I saw there were a lot of bodies and just tried to sneak it to the net," Giroux said. "It had eyes and went in."

The Flyers had the best chances in the five-minute, 3-on-3 overtime, but Scott Laughton drew iron with a shot and Cam Atkinson was stopped by Vasilevskiy with a pad save.

Vasilevskiy made 27 saves. Alex Killorn and Anthony Cirelli each had a pair of assists for Tampa Bay.

Giroux's highlight-reel tally opened the scoring 1:34 into the contest. Brassard slipped a pass to Giroux at the blue line, and the Flyers captain got behind Lightning defensemen Cal Foote and Mikhail Sergachev and in alone on Vasilevskiy. Giroux beautifully deked from his backhand to his forehand to net his sixth of the season.

Konecny put Philadelphia up 2-0 later in the first when he fired the puck from a sharp angle past Vasilevskiy's blocker.

Tampa Bay tied it with a pair of goals in the second.

Point converted 1:51 into the period on a power play, taking a pass from Stamkos and shooting with his backhand from in front of the crease that deflected off the handle of Hart's stick and just inside the post.

Joseph tied it with 5:08 left in the second. Killorn sent the puck toward the net and it deflected off defenseman Justin Braun's stick in front and on to Joseph's forehand, and he stuffed it between Hart's right foot and the post. Killorn has an assist in five straight contests.

Lightning: D Erik Cernak (upper body) missed his third straight. . Cirelli played with a face shield after breaking his nose in the third period of Monday's 4-1 win over the Islanders.

Flyers: D Ryan Ellis (lower body) will be out four to six weeks but won't need surgery. He has missed 10 of the last 11 games. . C Kevin Hayes (lower body) was out of the lineup. Hayes missed the first 12 games but played in the last two, scoring his first goal in Tuesday's 2-1 overtime win over Calgary. He appeared to get injured late in the second period in that contest but returned for the third. Vigneault said he'd know more in 2-3 days. . F Patrick Brown (dislocated thumb) didn't play after getting hurt on Tuesday.