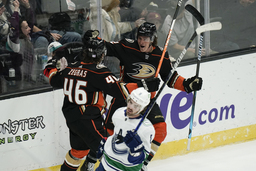 ANAHEIM, Calif. (AP) Trevor Zegras had two goals and an assist, Troy Terry extended his scoring streak to 14 games and the Anaheim Ducks rolled to their seventh straight victory, 5-1 over the Vancouver Canucks on Sunday night.

Sonny Milano also scored and John Gibson made 26 saves for the Ducks, who remained in second place in the Pacific Division while staying perfect since Oct. 29.

Adam Henrique and Sam Steel added goals in the final minute for Anaheim, which has earned a point in nine straight games and scored at least three goals in a franchise-record 11 consecutive games.

"It's nice to string some games along," Zegras said. "We've got a lot of guys playing with a lot of confidence. We've got (Terry) on a 14-game point streak. Obviously we've got (Gibson) in net making big saves at the right time. Definitely helps. It's fun to play right now."

Nils Hoglander scored and Jaroslav Halak stopped 33 shots for the Canucks, who have lost four straight and eight of 10.

"Not the team's best game," Vancouver defenseman Tyler Myers said. "It looked like we were a step behind tonight. We have to realize what kind of game we have to play coming into tonight. It has to be simple. It has to be quick, making the first play. It seemed like they were a step ahead of us tonight."

Zegras, the Ducks' promising 20-year-old center, produced the first multigoal game of his NHL career while scoring a career-best three points. Zegras got both of his goals on the power play before setting up Milano's goal with a spectacular spin-o-rama pass midway through the second period.

Zegras had gone scoreless in his previous four games before breaking out against Vancouver.

Anaheim coach Dallas Eakins said Zegras is "a wonderful thing to have in your back pocket. Even when the guy maybe hasn't been producing as much as he would like, Z thinks - and this is what I love about the kid - Z expects that three points every night. That's a hard thing to do in this league."

Terry got a secondary assist on Zegras' second goal to extend his streak while keeping pace with Edmonton's Connor McDavid, who scored two points against St. Louis, for the longest points streak in the NHL this season.

Captain Ryan Getzlaf also had two assists for the Ducks, giving him 999 career points and putting him on the brink of becoming the 92nd member of the NHL's 1,000-point club. The Ducks' 36-year-old franchise scoring leader is revitalized this season with 17 points in 16 games - matching his total scoring output last season over 48 games.

Anaheim beat Vancouver for the second time in six days while extending an overall winning streak that started before general manager Bob Murray resigned and announced his intention to enter alcohol abuse treatment earlier this week. The Ducks also improved to 6-2-1 at Honda Center.

A few minutes after Hoglander opened the scoring with his fifth goal of the season from the slot, Zegras got his first goal with a blistering one-timer off a pass from Hampus Lindholm in the first period.

Early in the second, Zegras collected a loose puck and flipped it into the top corner of Vancouver's net through a scrum in the slot.

"Obviously, the (penalty) kill let us down again tonight," Vancouver coach Travis Green said. "When you're playing a game like this with four games in six nights, your special teams are probably going to play a part of it. It was a big part of the game."

Henrique put his sixth goal of his resurgent season into an empty net.

With 22 points in 15 games, Terry has already exceeded his previous career high in points for a full NHL season. The former fifth-round pick from Denver has taken a major step forward after a gradual progression since his Anaheim debut in March 2018.