Sharks overcome loss of players, coach to protocols in win 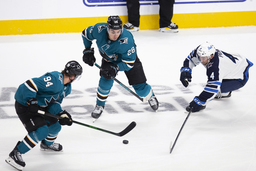 The Sharks announced before the game they would be without the seven players and coach Bob Boughner. The start of the game was delayed 30 minutes.

"That's what adversity does, right? It forces you to depend on each other and bring out the best in each other," Sharks goalie James Reimer said.

Meier scored on a one-timer from the wing that deflected off defenseman Logan Stanley's stick and sailed over goalie Connor Hellebuyck's shoulder at 1:07 of the overtime.

Meier scored his fifth goal after Nikolaj Ehlers was called for interference.

The Jets' Kyle Connor tied it with over three minutes left in regulation with a backhander from in front of the net off a shot by Dominic Toninato. Toninato's shot came off a pass from Pierre-Luc Dubois. Both were credited with an assist.

Connor's seventh goal extended his point streak to six games. He has seven goals and six assists in the stretch.

"Those guys that are goal scorers, when they start coming into their prime, they have a high expectation to score goals and they have a real nose for that net and when to get there," Jets coach Paul Maurice said.

Tomas Hertl scored his third goal just under a minute into the second period. Nick Bonino started the scoring play, bringing the puck up the ice deep into Winnipeg territory and slipping it to Meier, who found an open Hertl just outside the crease.

The Jets extended their point streak to six games (4-0-2) as they wrapped up their California road trip at 2-0-1.

"They inserted some guys that were chomping at the bit to get in the lineup, and it looked like it was the last game of a road trip for us," Jets forward Blake Wheeler said.

"No excuse though, we've got to be better than that through two periods, we expect more out of ourselves. I thought it was a positive sign in the third period, we pushed really hard and finally got rewarded there. Sometimes getting a point out of down game like that is a real positive."

Meier has at least one point in seven of the team's eight games this season.

"It was a tremendous effort," MacLean said. "(We) had great energy and they all knew they had to play. ... The bench was lively. They were pretty much coaching themselves. They were excited to get out there and play, so that's always fun to see."

Sharks center Logan Couture missed the game because he didn't feel well. He was not placed in the league's COVID-19 protocol.

Sharks defensemen Ryan Merkley and Santeri Hatakka made their NHL debuts, and forward Rudolfs Balcers played in his 100th NHL game on Saturday.

Winnipeg: Open a seven-game homestand against the Dallas Stars on Tuesday.

San Jose: Face Buffalo Sabres on Tuesday in the third game of a five-game homestand.