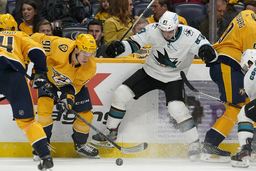 NASHVILLE, Tenn. (AP) Juuse Saros made 28 saves to lead the Nashville Predators to a 3-1 win over the San Jose Sharks on Tuesday night.

"I thought we got off to a really good start to the game," Nashville coach John Hynes said. "We were able to play the way we want to play, to our identity."

Timo Meier scored and James Reimer made 23 saves for the Sharks, which have lost two in a row following their season-opening four-game winning streak.

Duchene scored the game's first goal a little more than a minute into the opening period on a Nashville power play.

Just 19 seconds after former Predator Nick Bonino was sent to the box for tripping, Roman Josi passed the puck to Duchene just outside the blue line. Duchene skated into the high slot, made a quick toe-drag move to elude the stick of San Jose defenseman Brent Burns and then sent a wrist shot past Reimer on the glove side.

"I think we probably deserved to score a few more goals, I thought we had some really good looks," Duchene said. "Reimer played really well. He always seems to play well against us."

Saros had to be sharp early. At 4:44 of the first, he stopped Tomas Hertl on a breakaway when Hertl tried to slip a shot between Saros' pads, but the Finnish goaltender was able to squeeze them together to keep the game 1-0.

"I thought Hertl had a great game," Sharks coach Bob Boughner said. "He didn't really get anything to show for it. He had a lot of possession time. He was heavy down low."

Forsberg made it 2-0 at 12:31 of the second. Josi sent a pass from the left circle to Forsberg in the slot, where he snapped a wrist shot through traffic that beat Reimer on the stick side.

"I thought we played pretty well for 60 (minutes)," Forsberg said. "They're a pretty good team. They've got a lot of skill, a lot of young guys that are coming up and making a difference for them."

With two assists, Josi has seven points in his last three games.

Meier ended Saros' shutout bid at 11:54 of the third when he converted a backhand in front after collecting the rebound of a Jonathan Dahlen shot.

Saros got a little help from a friend down the stretch to preserve the victory with 4:08 remaining. when Ryan Johansen was able to get his stick on a Dahlen shot that had gotten behind Saros.

"Johansen saved a goal there late, just collapsing low, so that was a big key the game," Hynes said.

Granlund added an empty-net goal in the game's final minute.

Nashville announced an attendance of 16,395 on Tuesday night, short of the 17,159 Bridgestone Arena capacity. Nashville's streak of 192 consecutive sellouts came to an end.

Conversely, the Sharks were 0-3 on the power play Tuesday night. After scoring at least one power-play goal in their first three games of the season, they have not scored one in three straight.

During the first intermission media timeout, the Predators thanked Bonino for his efforts both on and off of the ice during his time in Nashville with a video tribute on the scoreboard. The Bridgestone Arena crowd cheered and players from both teams banged their sticks on the boards to acknowledge Bonino, who at the conclusion of the video, stood up, tapped his heart and clapped to the crowd.

Predators: Host the Islanders on Saturday.

Sharks: Host the Canadiens on Thursday.