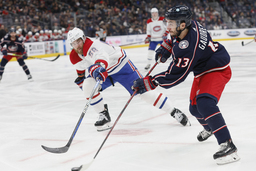 Having spent eight seasons with the Calgary Flames, Johnny Gaudreau of the Columbus Blue Jackets will be hosting his old teammates when the clubs meet Friday.

Gaudreau, who left the Flames as a free agent last summer by signing a seven-year, $68.25-million contract in Columbus, has plans to get reacquainted with his buddies the night before puck drop.

"It's going to be good to see them," Gaudreau said, according to Postmedia. "I still talk to a lot of them every single day."

Gaudreau, who skated in 602 regular season games for the Flames and collected 210 goals with 399 assists, might have some fun catching up with his former teammates, but he and the rest of the Blue Jackets are looking for a bounce back after their disastrous 9-4 home-ice drubbing at the hands of the Buffalo Sabres on Wednesday.

The cellar-dwelling Blue Jackets have lost three straight games and have just one victory in their last seven outings (1-5-1). Buffalo staked a 6-0 lead in the first period and cruised to victory.

"The worst part about it is we wasted everyone's time that was in the building," said defenseman Erik Gudbranson, another former Flame. "We can't give that time back to them. It's a tough feeling.

"We've got to figure some stuff out, you know, quick."

The Flames have not lived up to their expectations this season either but appear to be finding traction. Calgary heads into a three-game road trip having won three straight games, the latest a 5-3 victory over the Minnesota Wild on Wednesday. They won four of the five games during a just-completed homestand.

"It was important to finish the homestand (with a win)," said coach Darryl Sutter, whose squad has scored two power-play goals in each of the last two outings. "We talked about it, against a team that's going to be in a race with, that's for sure."

It is also important for the Flames to kick off their road swing on the right note against a struggling team, even if it means defeating an old friend.

"You guys make it bigger than it is," said defenseman Rasmus Andersson of facing Gaudreau. "It's a part of the business. It's free agents every year. People can pick and choose where they want to play if they're a good player.

"We've moved on and so has Johnny, but it's obviously going to be special for him to play against Calgary again. ... But for us it's another game we have to win."

The Flames made a couple of roster decisions in anticipation of the trip. They summoned forward Matthew Phillips from the AHL Calgary Wranglers. Phillips, a 24-year-old sixth-round draft choice from 2016, leads the AHL with 30 points (15 goals and 15 assists) in 20 games. A Calgary product, Phillips is Gaudreau-like in size, listed at 5-8, 160-lb.