Blues not panicking going into Game 2 vs. Avs 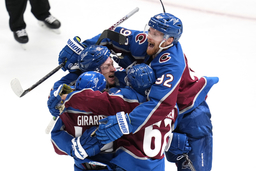 A layoff of eight days didn't seem to bother the Colorado Avalanche in Game 1 of their Western Conference semifinal series against St. Louis on Tuesday night.

They put 54 shots on goal, hit three posts and the crossbar twice before beating the Blues 3-2 in overtime.

Now the host Avalanche will try to take a 2-0 series lead in Game 2 on Thursday night in Denver.

Colorado's roster is packed with stars but it was the supporting cast that scored goals in Game 1. Valeri Nichushkin and Sam Girard scored in regulation, and Josh Manson got his first career playoff goal in overtime.

"Val is a train," Avs captain Gabriel Landeskog said. "He's been so good for us and keeps finding ways to be super effective for us and score big goals. ... In playoff games, every goal is massive, and it just brings out that emotion in you."

Girard was seen heading to get X-rays after the game but Avalanche coach Jared Bednar said Wednesday morning that he was fine.

Manson wasn't even part of the team three months ago but general manager Joe Sakic traded for the veteran defenseman to bolster the depth on the blueline. He is paired with Girard and gives Colorado a contrast in size. Manson is listed as 6-feet-3, 224 pounds while Girard is 5-10 and 170 pounds.

The Avalanche dominated most of Game 1 -- including a 13-0 shot advantage in overtime -- but came close to falling behind in the series. Blues goaltender Jordan Binnington had 51 saves and nearly stole the game, but Colorado is not panicking.

"Their goalie played really good for them," said Landeskog, who had an assist on the game winner. "He made some saves that we feel like we had empty nets and he stuck a leg out or a hand out or whatever. He played really well."

St. Louis has lost eight straight playoff games to the Avalanche dating to the 2001 Western Conference finals, and it has lost three in a row to them overall this season. Despite that record of futility, the Blues aren't concerned after one game, just focusing on what to do better.

"There's a lot of things that we can improve on. It's a long series," defenseman Colton Parayko said. "They have a good team, they're fast. We have a good team. We've been a good team all season long so I expect there to be a lot of close games and it's going to be a tight series. Just look at the positives, drop the negatives and move on."

St. Louis hopes defensemen Marco Scandella and Torey Krug can return from their lower-body injuries soon. Scandella has not played since Game 4 of the first-round victory over Minnesota and Krug has been out since Game 3.

Despite the injuries and the recent postseason dominance over the Blues, Colorado has a healthy respect for the 2019 Stanley Cup champs.

"We didn't make a lot of mistakes, but that's one thing about St. Louis: Even if they're not at their best, if you make any mistakes, they can win being opportunistic," Bednar said.