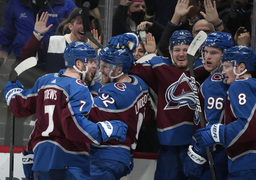 The Colorado Avalanche are expected to be without star forward Nathan MacKinnon when they visit the Chicago Blackhawks on Friday.

MacKinnon was injured Wednesday in the first period against the Boston Bruins when his own stick struck him in the face as he was hit by Bruins forward Taylor Hall. He left the game and was not expected to travel with the team to Chicago.

MacKinnon is third on the team with 43 points and second in assists with 34.

"I didn't love the hit," Avalanche coach Jared Bednar said. "Whether it's really solid or just a glancing blow, it's the type of hit the league is trying to get rid of."

The Avalanche rallied from a two-goal deficit entering the third period to secure a 4-3 overtime win against the Bruins. Colorado has won eight straight and is rolling right through January, going 13-0-1 in 14 games this month. It's a franchise record for most wins in a single month.

"You're trying to extend the streak you got going," Bednar said. "Guys don't want to lose. We were committed to our team game tonight against a really good team. To be able to stick with it, it's the belief. That's our biggest win of the year."

The Blackhawks are looking to win their second straight after snapping an 0-2-2 slide with an 8-5 win against the Detroit Red Wings on Wednesday. The last game of the skid was a 2-0 loss to the Avalanche in Denver on Monday.

Interim coach Derek King put an emphasis on a stronger net-front presence after that game and got results against Detroit, with four of Chicago's first five tallies coming in the area around the crease.

"Much better," King said. "And there's still room for improvement. Rome wasn't built in a day, they say, I guess. We'll keep picking away at it and keep hounding on them about getting to the front of the net."

"It's my first hat trick since the 2017 Memorial Cup, so it had been a long time," Strome said. "I've felt good for the last 12 or 13 games, and once the offense starts going, you remember they signed you to a contract for a reason. I'm still trying to prove that."

It's the fourth and final meeting between the two clubs this season. The Blackhawks have yet to beat the Avalanche, going 0-2-1 in those contests and getting outscored 10-5.