Streaking Ducks get another stern test vs. Hurricanes 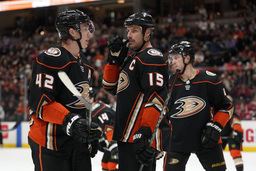 After taking down one potential Stanley Cup contender already this week, the surging Anaheim Ducks set their sights on another.

The Ducks are looking for a ninth consecutive victory when they play host to the visiting Carolina Hurricanes on Thursday night.

After totaling 43 points in 56 games last season, Anaheim has been a major surprise out of the gate in 2021-22 after last making the playoffs in 2018.

The Ducks moved to the top of the Western Conference on Tuesday with a 3-2 overtime home victory over the Washington Capitals. The victory extended their longest winning streak since an 11-game run during the 2015-16 season.

It was also the 1,000th victory in franchise history and sixth consecutive home win for the Ducks, who have recorded at least one point in 10 straight contests.

"If you would have told us we'd be in this spot last year, I probably would have laughed," Trevor Zegras told Bally Sports West.

"Eight wins in a row is impressive at any level," the second-year player said. "It's a lot of fun right now."

Zegras has totaled four of his six goals in the last two games. Plus, there is teammate Troy Terry, whose 15-game point streak (11 goals, 10 assists) is tied for third-longest in franchise history. And, captain Ryan Getzlaf (seven assists in four games) recorded career point No. 1,000 on Tuesday in his 17th season NHL season, all in Anaheim.

Ducks goalie John Gibson has posted a 1.69 goals-against average and .942 save percentage during his personal seven-game winning streak.

That's built up plenty of confidence within this Anaheim group. Enough to beat a Washington squad that has just two regulation defeats and whose 23 points match the Ducks and are one fewer than Carolina, which has won 12 of its 14 games to open this season.

The Hurricanes won their first nine games of 2021-22, then lost two of three before beating St. Louis 3-2 on Saturday and kicking off a season-long six-game road stretch with Tuesday's 4-2 win over Vegas. Sebastian Aho notched his seventh goal and added his ninth assist as Carolina broke open a 2-2 game by scoring twice in the third against the Golden Knights.

"(In the third period), I think we really played our game," Carolina's Seth Jarvis said after scoring the tiebreaking goal 1:11 into the third. "Just put some pucks on the net, especially on faceoffs, create a little chaos, and good things happen when you go to the net."

Aho continues to make good things happen with a goal and an assist in each of the last two games for the Hurricanes, who have outscored their opponents 24-15 while going 6-1-0 on the road. He has three goals and four assists over eight games against Anaheim.

Teammate Andrei Svechnikov has two goals with seven assists while registering at least one point in each of Carolina's road contests this season.

Returning from a three-game concussion absence, Carolina's Antti Raanta made 21 saves to win his second start Tuesday. Teammate and former Duck Frederik Andersen ranks among the NHL leaders with nine wins and a 1.77 goals-against average.

Anaheim has dominated this series for more than a decade, going 15-3-1 in the last 19 meetings.