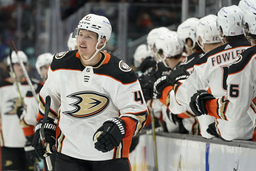 Ever since the afternoon of Halloween, the Anaheim Ducks have been a fright for the rest of the NHL and will have a chance for more treats when they open a three-game homestand Sunday against the Vancouver Canucks.

Since their 4-2 victory over the Montreal Canadiens on Oct. 31, the Ducks have been one of the hottest teams in the NHL with six consecutive wins. They also have one of the league's hottest players in Troy Terry, who is on a 13-game points streak.

Terry had the game-winning goal with an assist in a 3-2 overtime victory at Vancouver on Tuesday, then had two goals and an assist in Thursday's 7-4 victory over the Seattle Kraken. Heading into play Saturday, Terry was tied for third in the NHL in goals (11) and tied for fourth in points (19).

"That's the difference with this team this year is that we're winning games in all different ways, when we have our A game and when we don't," Terry said on Bally Sports West.

Expected to take on somewhat of a lesser role this season at age 36, captain Ryan Getzlaf had 13 assists, one fewer than the Edmonton Oilers' Leon Draisaitl for third-most assists in the NHL at 14.

And it was a Getzlaf assist that appears to have sparked the current Ducks run. His pass to Terry for the go-ahead goal against the Canadiens, made Getzlaf the Ducks all-time points leader as he moved passed his mentor Teemu Selanne.

More history is on the way as Getzlaf is sitting on 997 career points with his 15 from this season.

"It's probably the best we've played, probably in the last two or three years, as far as not panicking and sticking to the things we do well no matter the situation," Getzlaf said.

The Canucks will enter off a 7-4 loss to the Vegas Golden Knights on Saturday. Nils Hoglander had two goals and an assist, as Vancouver had a 2-1 lead in the first period and was even at 4-all with fewer than 17 minutes to play before the game got away late.

The Canucks have now given up 14 goals over their last two games. Thatcher Demko started in goal in both games for Vancouver.

Vancouver put together a late rally to tie the Ducks on Tuesday, getting a T.J. Miller goal with 6:31 remaining before Elias Pettersson scored a short-handed goal with 55 seconds on the clock to force overtime. Quinn Hughes and Brock Boeser had the assist on both goals.

Vancouver followed the Anaheim defeat with an embarrassing 7-1 road loss to the Colorado Avalanche on Thursday and then went to Vegas where another onslaught of goals from their opponent followed.

Looming for the Canucks, after their game at Anaheim, is a home visit from the Avalanche on Wednesday.

"I don't think they're on top of their game for sure," Canucks head coach Travis Green said about his top players. "I'm not going to get into specifics here, I'm not going to start with names, but we have some guys that need to play a lot better, that's for sure."