Blues have big skates to fill with Avs next 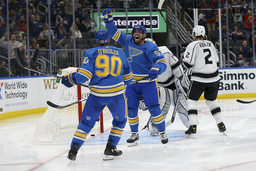 The St. Louis Blues will have to adjust to life without captain Ryan O'Reilly when they host the Colorado Avalanche on Thursday night.

O'Reilly will be sidelined for at least 10 days in COVID-19 protocol. He played an integral role in the team's franchise-best 5-0-0 start.

He typically centers the top line, anchors the No. 1 power-play unit, kills penalties and takes the important faceoffs. His absence will be noticed when the Blues face the Avalanche at Enterprise Center.

"It's a challenge," Blues coach Craig Berube said. "We have good depth here. Everybody's going to have to step up and next guy up. That kind of attitude and go from there."

During Wednesday's practice, Berube kept his effective line of Robert Thomas centering Ivan Barbashev and Vladimir Tarasenko together. Brayden Schenn took O'Reilly's place on the first line between David Perron and Klim Kostin, while Tyler Bozak moved up from the fourth line to center Jordan Kyrou and Pavel Buchnevich.

Dakota Joshua, just back from the AHL, replaced Bozak on the fourth line.

"There's a lot of minutes to be grabbed there," defenseman Robert Bortuzzo said. "I think guys are going to be champing at the bit to fill some of these areas whether it's starting out on the PK or filling in on the power play, taking that challenge of playing the other team's top line. I'm sure there's many guys in that room who are bummed that he's out but excited for the challenge."

Meanwhile, the Colorado Avalanche are trying to get on track after regaining star center Nathan MacKinnon from protocol. The Avalanche fell to 2-4-0 with their 3-1 loss to the Vegas Golden Knights Tuesday night.

"We're sort of stumbling and bumbling along right now, so there's a level of concern," Avalanche coach Jared Bednar said after that game. "It's not like, 'Well, we just didn't play good tonight and (we're) moving on to the next one.'

"Part of what we talked about today was that if we win tonight and we're able to get to .500, now we can start (moving) above .500 if we do our job. If you lose, you drop two games back, and now we'll see how long it takes us to get back. It could be seven days, it could be 10 days, it could be a month."

Playing without MacKinnon, the Avalanche lost to the Blues 5-3 on Oct. 16 in Denver.

"You can't overthink it. It is what it is and the best way to deal with it is move on and wait for these guys to get healthy and get back," Berube said. "But in the meantime, go play hockey."