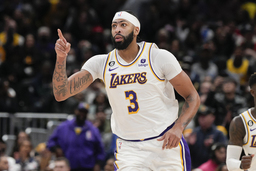 CLEVELAND (AP) The flu shut down Anthony Davis. That's the only thing that has stopped him lately.

Davis was forced to leave Los Angeles' game against the Cleveland Cavaliers after the first quarter on Tuesday night and the Lakers struggled without their All-Star center in a 116-102 loss.

Davis had scored 99 points in his previous two games and had been on a tear over the past 10 as the Lakers went 8-2 to erase most of a horrible start this season. He scored just one point in eight minutes before he was forced to leave.

Davis didn't attempt a shot while adding three rebounds and two assists before being forced to call it a night.

Lakers coach Darvin Ham said Davis' symptoms gradually got worse during the course of the day.

"His temperature was 101 and some change," Ham said. "A-D wanted to try to play, but he felt too weak. He's drained and dehydrated. That's a huge loss, obviously, with the way he's been playing lately."

Ham said Davis is unlikely to play on Wednesday in Toronto. He also stressed Davis had not tested positive for COVID-19.

"Because of COVID, people forget that there is a common cold and a common flu out there," Ham said. "That's what we're dealing with here."

The eight-time All-Star, who has played just 76 games over the past two seasons due to injuries, was chosen Western Conference player of the week on Monday after averaging 37.8 points, 13.0 rebounds, 3.0 assists and 3.3 blocks in four games.

Without him, the Lakers lacked an inside defensive presence and Cavs center Jarrett Allen scored 24 points, 22 in the first half on 10-of-11 shooting.

LeBron James tried to pick up the slack, grabbing 17 rebounds - his most ever in a road game. Reserve Thomas Bryant replaced Davis and scored a season-high 19 points in 28 minutes but Los Angeles couldn't offset the loss of Davis.