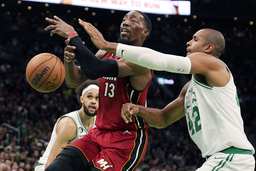 The team announced Thursday that the 36-year-old veteran big man has signed an extension to remain in Boston.

The deal is for two years and $20 million, according to a person with knowledge of the agreement who spoke to The Associated Press on condition of anonymity because the team did not disclose the terms of the contract.

"Boston has become a home to me and my family as my teammates and I continue to strive towards winning Banner 18," Horford said in a statement released through the team.

Horford left the Celtics in free agency after three seasons following the 2018-19 season and signed a four-year, $109 million contract with the 76ers. He spent just a season in Philadelphia before being traded to Oklahoma City. The Thunder then packaged him in deal in summer 2021 that netted them Kemba Walker and sent Horford back to Boston.

"Al is such an important part of our team," Celtics president of basketball operations Brad Stevens said in a statement. "He's a high-level player who enhances everyone around him on both ends of the court. His work ethic, commitment to his body and craft, and his unselfishness set a daily example on how to win big in the NBA."

With Williams sidelined again for the start of this season following knee surgery, Horford has been solid, averaging 10.3 points and 6.3 rebounds per game while shooting 55% from the field.