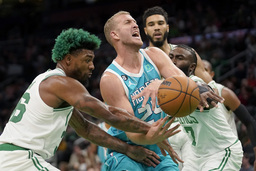 BOSTON (AP) Not too many NBA first-timers get to take over a reigning conference champion and oddsmakers' favorite to win an NBA title.

Joe Mazzulla knows he's one of the lucky ones.

"I felt like I was coaching a great team that wanted to win, that was fun to coach," the newly promoted Boston Celtics coach said on Sunday after making his debut in a 134-93 preseason victory over the Charlotte Hornets.

"Just grateful for it. Grateful because it's the Celtics. Grateful that it's great players," Mazzulla said. "Not many people in my position get that opportunity."

Ten days after the Celtics suspended coach Ime Udoka and less than a week after the team reported to training camp, Mazzulla and the Celtics opened their exhibition schedule by romping to an easy victory in front of a sold-out - but perhaps skeptical - TD Garden crowd.

Mazzulla got little reaction from the Boston fans when his name was announced with the starting lineups.

But the players noticed.

Wearing a white Celtics pullover and chomping on gum, Mazzulla spent much of the first half standing in front of the bench and barking out instructions. In the second, when the Hornets never got within 20 points and trailed by as many as 46, the 34-year-old Rhode Island native spent more time in his seat.

"He's not a yeller; he's not a screamer. He's very deliberate and very direct. He's not a guy that's going to over talk you," Brogdon said. "He's going to be very direct and honest with what he wants from you, which is everything an NBA player wants from a coach."

Jaylen Brown scored 24 points in 24 minutes, Jayson Tatum had 16 and Noah Vonleh had nine rebounds for the Celtics. Brogdon received a big cheer when he entered the game midway through the first quarter and finished with 11 points and nine assists.

Boston's only draft pick, J.D. Davison, finished out the game as the point guard and picked up four points and four assists in six minutes. Kelly Oubre Jr. scored 17 for Charlotte, which played its first game in coach Steve Clifford's second stint with the team.

Media arriving at the game found the box score from Game 6 of the NBA Finals still displayed on the statistics terminals. The Celtics lost 103-90 to Golden State to give the Warriors their fourth title in eight seasons.

So much has happened since then.

The Celtics toyed with the idea of trading for Kevin Durant - talks that went nowhere but lingered long enough to leave Brown wondering about his future in Boston. They signed veteran forward Danilo Gallinari - and then lost him for the season to a torn ACL. Center Robert Williams III had knee surgery and will also miss the start of the season.

The franchise also said goodbye to Hall of Famer and civil rights pioneer Bill Russell, who died this summer at the age of 88. The NBA announced that it will retire Russell's No. 6 across the league, and the Celtics have tributes planned throughout the season. (Sunday was the first look at the "6" painted in the free throw lane at both ends of the court.)

The team added veteran big man Blake Griffin last week. Although the deal has not been officially announced and he was not on the Celtics roster for the game, he was in the building greeting his new teammates.

But the big surprise came three days before the start of training camp.

Just a year after Udoka was hired in a surprising offseason shakeup that saw team president Danny Ainge depart and coach Brad Stevens move up to the front office to replace him, the Celtics suspended Udoka for an improper relationship with a woman in the organization.

Mazzulla will replace him for the season, if not beyond. His last game as a head coach was at Division II Fairmont State in 2016.

"He's still figuring it out," Brown said. "It's preseason right now. Super early, so we're still figuring everything out, getting a feel for each other. But preseason or not, I think that was a good start."