Durant, Irving try to move on after Nets' turbulent summer 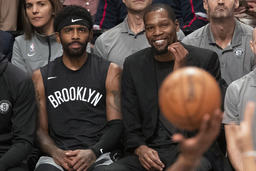 NEW YORK (AP) Kevin Durant asked to leave, though figured he wouldn't. Kyrie Irving wanted to stay, but feared he might be gone.

As the chaotic Brooklyn Nets' offseason was unfolding, even the key players struggled to make sense of things.

Now the Nets are ready to leave it all behind.

With Durant still in uniform and saying he's committed, and Irving still around but with no guarantee beyond a year, Brooklyn has undeniable talent and an uncertain future.

Durant asked to be traded after the Nets were swept by the Boston Celtics in the first round of the playoffs. He said his dissatisfaction started months earlier, disappointed by the lack of fight the team showed when he was sidelined by a sprained knee ligament in January and February.

The Nets had discussions, but trading an All-Star player who is about to start a four-year extension and getting comparable value back was never going to be easy.

"I mean, I know I'm that good that you're just not going to give me away," Durant said.

The Nets didn't deal him, nor did they fire general manager Sean Marks or coach Steve Nash, as Durant sought. Nash said he and Durant have had a lengthy relationship, likening it to a family disagreement.

"Everybody's entitled to their opinions and I think from us, it's not to hold a grudge against what Kevin said, but it's a little bit of saying, `All right, if that's the way he feels, what's going on here?" Marks said. "Like, what do we need to change?"

At the same time, the Nets were declining to give Irving the contract extension for which he was eligible. He missed almost all their home games last season because he wasn't vaccinated against COVID-19, as was mandated at the time in New York City. He comes into this season in the final year of his deal.

Irving said his refusal to get vaccinated created questions about his commitment to playing, which may have contributed to him still being in Brooklyn. Some teams may have been hesitant to deal for the guard, despite his talent, because they weren't sure how often they would see it.

"There were options," Irving said, "but not many, I'll tell you that, because again, this stigma of whether or not I want to play, whether or not I'm going to be committed to the team, which I thought was really unfair at times. But also the timing was ideal to be able to put that on me because I wasn't available."

Not getting a long-term deal, Irving said, was a "tough pill to swallow," but he said he understood the Nets' side. He also understands Durant's feelings, agreeing that the team needs the structure that was missing.

"There was a level of uncertainty in this building, not just for last year, but for the last few years," Irving said, "and that accountability that he asked for should be available and accessible at all times and we should have that type of environment."

Irving could have received an extension last summer and believed it would happen before the season. Talks broke off after it became clear he wouldn't be a full-time player. Marks said the Nets didn't try to force vaccination on Irving, though Irving said he felt there was an "ultimatum" if he wanted to get paid.

"I gave up four years, 100-and-something million deciding to be unvaccinated and that was the decision," Irving said. "The contract, get vaccinated, or be unvaccinated and there's a level of uncertainty of your future as to whether you're going to be in the league, whether you're going to be in this team. So I had to deal with that real-life circumstance of losing my job for this decision."

The Nets and Durant jointly decided to continue together, and he said he wasn't disappointed to still be in Brooklyn.

"I still love to play," Durant said. "I knew that wasn't going to be affected."

As for whether Nets fans should question whether he is truly all-in on Brooklyn?

"I'm committed to going forward with this team ," Durant added, "so if they got doubts, I can't control that."

Ben Simmons is set to finally play for the Nets after the Philadelphia 76ers traded him to Brooklyn in February in a deal headlined by James Harden.

Simmons ended up needing back surgery. While he was rehabbing, he wondered whether he would ever take the floor with Durant and Irving in Brooklyn.

"Obviously you know somebody asked for a trade, Kyrie wasn't around. Like, different things were going on, but I don't worry about that stuff because I can't control it," Simmons said. "Obviously it's a blessing to be able to play (with talented players), but I just focus on what I can contribute and do for this team and at that moment it was getting healthy."

Joe Harris said he is cleared to play after needing two ankle surgeries last season. Seth Curry said he's about 85 to 90% there after his own ankle procedure, while T.J. Warren, who played in just four games in Indiana the last two seasons because of foot injuries, said he is healed but not cleared yet because they want to be careful.