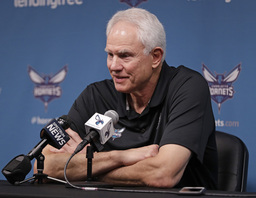 Kupchak's contract was set to expire this summer.

"For better or for worse, I will be here for the next couple of years," Kupchak said Thursday on a videoconference call. He would not say when the contract expires.

The 67-year-old Kupchak will continue to lead the team's search for a coach.

He said the team already has interviewed eight to 10 candidates and could speak with a few more over the next week or so. He prefers to make a hire in the next two weeks and at the very latest before the June 23 NBA draft.

The Hornets fired coach James Borrego last month after a meeting with owner Michael Jordan in Florida. He said it was "ultimately my decision" to fire Borrego but that he had Jordan's support.

Charlotte went 43-39 this season and finished in 10th place in the Eastern Conference before losing 132-103 to the Atlanta Hawks in the play-in tournament. It was the second straight year the Hornets were embarrassed in the play-in game.

Kupchak said the back-to-back lopsided play-in losses were a factor in the decision to part ways with Borrego after four years, but he refused to go into details regarding the other reasons for his dismissal.

He said the Hornets want to find a coach who can help the team "take the next step."

He said the goal this past season was to make the playoffs, something the Hornets failed to do for the sixth straight season. Charlotte has not won a playoff series in more than two decades.

"It was just time to go to another voice and look for another coach to bring us the same kind of improvement that coach Borrego did the first three years," Kupchak said.

He said one of the immediate goals this offseason is to re-sign Bridges, a restricted free agent, after a breakout season in which he averaged 20.2 points and seven rebounds per game.

The Hornets have the 13th and 15th picks in the draft, and their most pressing need remains finding a big man, primarily for rim protection. Kupchak is hoping one of the team's younger players - they recently drafted Kai Jones and Nick Richards - might be able to step up and fill that role.

Regardless, it doesn't sound like the team will go overboard in trying to sign high-priced veteran free agents to compete for a title. Kupchak doesn't want this to be a one-year plan; rather, he said the focus should be on building a consistent winner.

"The thing we have to be careful about is thinking that we're better than we really are," Kupchak said. "We are not a team that is going into the NBA Finals. Although Atlanta got into the conference finals a year ago, I don't know how realistic that is. I'd like to get us into the playoffs, and wouldn't it be great to win a round? And then anything after that would probably be gravy."