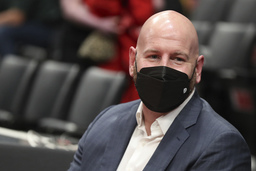 PORTLAND, Ore. (AP) Joe Cronin has been named the Portland Trail Blazers' general manager after serving in the interim role since December.

Cronin became interim GM after Neil Olshey was fired following an investigation into allegations of a toxic workplace environment.

Cronin has since been reshaping the Blazers' roster, making several trades before the February deadline that put the team under the luxury tax threshold and freed up cap space. In the most significant move, guard CJ McCollum was traded to New Orleans, ending his lengthy run as Damian Lillard's partner in Portland's backcourt.

The Blazers finished 27-55 this season, their worst record since 2005-06 when they won just 21 games. Portland also finished 13th in the Western Conference in Chauncey Billups' first year as the Blazers' head coach, snapping a streak of eight straight playoff appearances.

The Blazers await their fate in next week's NBA draft lottery ahead of the June 23 draft. Free agency opens in July.

"We've established a great working relationship in the last six months and have the same vision for what it takes to win a championship in this league," Billups said in a statement Tuesday. "I look forward to bringing Joe's vision to life with our entire front office."

Cronin signed a four-year deal with the Blazers.

He has been with the Blazers since 2006 and became a pro scout and salary cap analyst in 2010. He was named the team's director of player personnel in 2014 and was promoted to assistant GM last year.