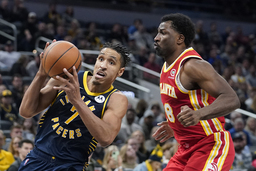 ATLANTA (AP) Atlanta Hawks forward Solomon Hill is expected to miss the remainder of the season with a hamstring injury, adding to the team's growing lack of depth on the wing.

The Hawks said Wednesday that Hill needs surgery to repair a torn right hamstring tendon. Hill suffered the injury when he slipped and did a split in Sunday's loss to Charlotte.

Timothe Luwawu-Cabarrot has been the fill-in starter at small forward while Hill has played both forward spots and shooting guard.

Hill averaged 4.5 points and 3.0 rebounds in 71 games, including 16 starts, for Atlanta last season. He played in 13 games, with one start, while averaging only 0.6 points this season.

For his career, Hill has averaged 5.5 points in 10 seasons with Indiana, New Orleans, Memphis, Miami and Atlanta.