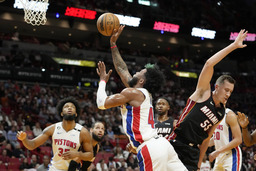 MIAMI (AP) Bojan Bogdanovic scored 31 points, Alec Burks added 18 and the Detroit Pistons pulled away in the second half to beat the Miami Heat 116-96 on Tuesday night.

Saddiq Bey scored 14, Isaiah Stewart had 11 points and 11 rebounds and Cory Joseph also finished with 11 points for the Pistons, who trailed 50-47 at halftime - then outscored Miami 69-46 in the final two quarters.

It was Detroit's biggest margin of victory this season. The Pistons had won only one game by more than seven points, that being a 128-114 triumph over Golden State on Oct. 30.

Tyler Herro led all scorers with a season high-tying 34 points for Miami, which has dropped three of its last four games. The Heat are off to an 11-14 start for the third time in the last five seasons.

Miami played without Jimmy Butler (right knee injury management), Dewayne Dedmon (left foot plantar fasciitis) and Gabe Vincent (left knee). But the Heat had Victor Oladipo for the first time all season; Oladipo, who had been sidelined with a knee issue since the preseason, had nine points in 18 minutes.

It was only the 80th appearance for Oladipo out of a possible 317 games since he suffered a severe knee injury while with the Indiana Pacers in 2019.

Herro made his first eight shots, seven of those in the first half, staking Miami to its slim early lead.

Herro averages 27.8 points in five career games against Detroit, his most against any team. He and Bam Adebayo combined for 55 points but the other eight Heat players who played Tuesday combined for only 41.

Pistons: Casey has coached against Miami's Erik Spoelstra 44 times. Of the 102 coaches he's faced in the NBA, he's gone up against nobody more often than he has Spoelstra. ... Detroit is now 4-3 when holding opponents to 109 points or less. The Pistons are 3-16 when allowing 110 or more. ... The Pistons outscored Miami 57-30 from 3-point range. ... Cade Cunningham (left shin soreness) didn't play.

Weston McKennie, a midfielder for the U.S. men's national soccer team, was at the game and seated at a courtside table. McKennie played in all four games with the U.S. in the World Cup at Qatar; the Americans were eliminated with a round-of-16 loss to the Netherlands on Saturday.