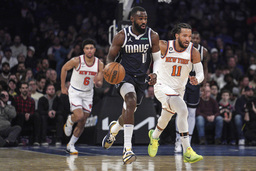 NEW YORK (AP) Luka Doncic had a game-high 30 points, Tim Hardaway Jr. chipped in 28 points against his former team, and the Dallas Mavericks beat the New York Knicks 121-100 on Saturday.

Spencer Dinwiddie scored 17 points for Dallas, which outscored New York 69-41 in the second half for just its second win seven games.

"I think it's great that everyone's in the locker room smiling," Mavericks coach Jason Kidd said. "Everybody saw the ball go in, we shared the ball, we played the right way. ... We're a team that lives or dies by the 3, and today we made them."

Forward Julius Randle led the Knicks with 24 points, and Immanuel Quickly chipped in 23. Leading scorer Jalen Brunson had 13 points playing against Dallas for the first time since he signed with the Knicks on July 12, but New York fell for the sixth time in its past eight games.

"To be honest, not fun," Brunson said when asked what it was like playing against his former team. "They played great tonight. You got to give them credit. No matter who is on the floor, my approach stays the same. But to see them after the game and shake their hands, that was pretty cool."

Hardaway exacted revenge against his former team, with whom he played 254 games over parts of four seasons. Hardaway had 17 points in the third quarter, including five 3-pointers, during a 27-6 run. He credited familiarity in New York - and Dallas' previous game in Detroit - as keys to his third straight 20-plus point game.

"This road trip, when you have family and friends in both cities, it lightens you and brings some positive vibes and some positive energy," Hardaway said. "To come here, to Detroit and to New York, both places where I used to play college and professionally, was a great atmosphere. I was comfortable, and my teammates (were) keeping me positive."

Doncic, the NBA's leading scorer, had just 11 points on 3 of 11 shooting in the first half. But he took over in the third, scoring 19 points on 8 of 10 shooting. Dallas outscored New York 41-15 in the third quarter, turning a tight game into a rout.

"The first half I wasn't really participating," Doncic said. "It was a challenge to come out of the locker room with more energy."

The Knicks led by as many as 15 in the second quarter, but Dallas turned up the defensive intensity and cut New York's lead to seven, 59-52, at halftime.

"The start of the game, I thought we were pretty good," Knicks coach Tom Thibodeau said. "We built the 15-point lead, then we sort of lost traction mid-second quarter."

Dallas was without center Christian Wood (non-COVID illness). He had scored 20-plus points in five of the Mavericks' previous eight games. . Five Mavericks players - Hardaway, Reggie Bullock (10 points in 25 minutes), Frank Ntilikina (0 points in 5 minutes), Theo Pinson (0 points in 4 minutes) and Kemba Walker (DNP) - previously spent time with the Knicks. . Walker, who played 37 games for the Knicks in 2021-22, was on the Mavericks bench but did not dress after signing a one-year contract with Dallas on Tuesday.