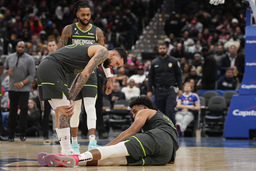 WASHINGTON (AP) Kristaps Porzingis scored a career-high 41 points, including 29 in the first half, and the Washington Wizards beat Minnesota 142-127 on Monday night after Timberwolves star Karl-Anthony-Towns was helped off the court in the third quarter with a right leg injury.

Towns grabbed at his leg and went down near midcourt. He was helped off without putting weight on the leg, and the team announced that he had a right calf strain.

All six of Porzingis' 3-pointers came in the first half. Washington shot 57% from the field for the game.

The Wizards led 77-58 at halftime, and Porzingis was well on his way to surpassing his previous career high of 40 points.

"I have to admit, I feel good," Porzingis said. "I thought that I was not going to get it because we were going to blow them out by 30 and then not maybe play the fourth. I was thinking about that scenario."

Anthony Edwards led the Timberwolves with 29.

Porzingis made his first four shots, all from 3-point range, and Washington led 21-6 early. It was a five-point game after one quarter, but the Wizards pulled away in the second. A 3-pointer by Porzingis capped a 12-0 run that made it 68-44, and his final 3 gave Washington a 73-46 lead.

Minnesota closed the half with a 12-4 run and then scored the first 10 points of the third, but the Timberwolves never got much closer. Towns left the game immediately after Kuzma made a 3-pointer to make it 93-76.

It was a rough couple days for the Timberwolves defensively. They lost 137-114 to Golden State on Sunday.

Washington was also playing the second half of a back-to-back after losing 130-121 at Boston.

"Certainly it set the tone with all the 3s they made early," Minnesota coach Chris Finch said. "We haven't been making 3s at a very good clip recently at all, so it's a huge deficit."

Porzingis' previous career high came when he was with the New York Knicks, against Indiana on Nov. 5, 2017.

He surpassed that with a three-point play with 4:49 to play, then exited the game moments later.

"It's always fun when you can get somebody a career night," Kuzma said. "It's very, very hard to play in this league. It's very hard to do anything in this league, and any time players can have career highs it means a lot to them, and as a player you understand how much it means."

Wizards: At Brooklyn on Wednesday night.

This version has been corrected to delete a reference to Washington's biggest lead being 27 points.