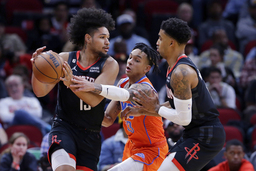 Rookie Jabari Smith Jr. had his third double-double with 15 points and 13 rebounds for the Rockets, who have won back-to-back games for the first time since beating Portland last March 25-26.

"I think we're just tired of losing in general. We're coming together and buying in on the defensive side," Green said. "I think that's what's been helping us out."

Smith is the 12th player 19 years old or younger to have at least three double-doubles within his first 18 games. Smith recorded his 100th career defensive rebound in the first quarter as well.

"He's very aggressive and I love that," coach Stephen Silas said. "He's aggressive. He's shooting the ball better. His work is paying off. He's a great worker. On the defensive end he really solidifies us and his rebounding is really good. He's starting to understand how he can be successful out there."

Josh Giddey chipped in 18 points, Aaron Wiggins had 15 off the bench and Jalen Williams scored 11 for the Thunder, who have dropped four of five.

After missing Friday's game against the Atlanta Hawks, Eric Gordon and Sengun returned to the starting lineup and had an immediate impact for Houston.

Sengun scored seven points in the first quarter before Gordon made a 3-pointer with 2.8 seconds left for a 23-22 lead. Gordon finished with 15 points and was 4 of 6 on 3s.

"Our defense wasn't what it should have been and needed to be to win a game," Giddey said. "They capitalized. Slow starts have been a common theme, we got to flip the switch and come out of the gates ready to go. Just didn't from the jump tonight."

"Honestly, every game we've been getting better," Porter said. "Especially the starting five. At the beginning of the season we were very slow at starting most games but as you can see we're starting to throw the first punch and that's been helping the bench come in and maintain or grow the lead."

As Sengun sat and watched the Rockets climb out of a 15-point deficit on Friday, he knew he would be back in the lineup on Saturday and needed to help them get another win.

"I was playing bad the last couple of games," Sengun said. "I just focused more today."

Thunder: Mike Muscala missed his third straight game with a broken left pinky . Oklahoma City started the game 1 of 8 from 3 and finished 9 of 37 (24.3%).

Rockets: Gordon and Sengun both had been sidelined by right groin strains.. Ja'Sean Tate was out for the 12th straight game with a sore right ankle.

Thunder: At New Orleans on Monday

Rockets: At Denver on Monday