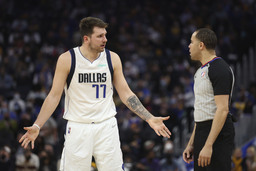 SAN FRANCISCO (AP) Klay Thompson is playing a few more minutes now, making pretty passes and knocking down shots from all spots on the floor. Sure, everyone told him to expect rust for a while - and he's not having it.

"I really pride myself on my efficiency, so it felt good to be myself again," Thompson said.

Golden State's shooting star returned and scored 15 points to go with six assists after he sat out two games, Stephen Curry had 18 points, nine rebounds and seven assists, and the Warriors pounded Luka Doncic and the Dallas Mavericks 130-92 on Tuesday night.

It was a tough night for Dallas seeing Tim Hardaway Jr. go down with a broken fifth metatarsal bone in his left foot. The guard was helped off with 7:16 left in the second quarter and didn't return. Hardaway went down awkwardly on a drive and grabbed at his foot, but was able to get up and shoot his free throws before exiting for the locker room.

"I just want to say how sorry we are to hear that. You hate to see anybody get injured," Warriors coach Steve Kerr said. "I just want to send him our regards from the organization and hopefully he's back sometime soon. I don't know what the prognosis is. We feel terrible for him."

Thompson had missed two in a row, Friday for rest after a back-to-back and Sunday's 94-92 victory over Utah with soreness in his surgically repaired left knee that he said he hyperextended the last time he played that caused some swelling.

"My mindset is just to play with energy, great focus and joy," said Thompson, who played a season-high 25 minutes.

"I think this was Klay's best game in terms of his patience and allowing things to happen, he wasn't forcing it at all," Kerr said.

A couple of times late Thompson hit rookie Jonathan Kuminga, who dazzled again with a high-flying slam over Josh Green with 7:12 left in the game and converting the and-one for a three-point play. Curry watched in pure admiration and Kuminga made his way to the bench with a big grin.

He dunked again the following possession and hit a 3 the next time down and wound up shooting 8 of 9 for 22 points.

"Growing up watching Klay play basketball I have never really seen him pass the ball the way he did today so it's surprising," Kuminga said.

Doncic had 25 points and eight rebounds, while Hardaway scored 10 points in 10 minutes for a Mavericks team lacking the smothering defense that held Golden State to 82 points in a 99-82 victory Jan. 5 in Dallas.

"That's just bad luck," Doncic said of his teammate. "I talked to him. He's disappointed. Every time you get injured you are sad, so we tried to cheer him up."

Curry made his first 3 attempt at the 7:13 mark of the first quarter then missed the next three before halftime, when Golden State led 63-51 behind 54.2% shooting, and five in a row in all before connecting again with 5:08 remaining in the third.

Jordan Poole scored 17 off the bench as Golden State snapped a three-game losing streak to the Mavericks.

Kristaps Porzingis got ejected with 8:21 left in the game when he booted a ball into the stands. He high-fived fans while exiting.

BACK IN THE BAY

Mavericks coach Jason Kidd relishes each return home to the Bay Area. He was born in San Francisco, went to high school in the East Bay suburb Alameda and attended California-Berkeley.

"It's always great to come back home and see family and friends," Kidd said. "It's cool. I've come back as an assistant coach, a head coach and player."

With Thompson back after being sidelined since June 2019 first by the knee then a torn right Achilles tendon that required surgery, opposing coaches like Kidd are thrilled to see the Splash Brother playing again after such a daunting rehab ordeal.

"It's incredible not to just come back from one injury but from two," Kidd said. "That's who Klay is, that's his character. He's a champion."

Warriors: Golden State shot 8 for 21 on 3s in the first half and 17 of 43 from deep overall. ... The Warriors honored Hall of Famer Chris Mullin during their season-long celebration of team greats in the 75th anniversary year. Kerr recalled the "crafty" lefty. ... Nemanja Bjelica notched his second double-double with 10 points and 10 rebounds and added four of the team's 31 assists.

Mavericks: At Portland on Wednesday night to complete a back-to-back.

Warriors: Host the Timberwolves on Thursday night in the sixth game of a seven-game homestand, having won the last 10 against Minnesota at home.