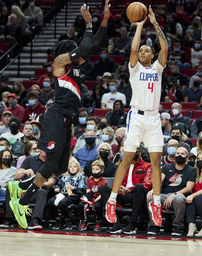 Marcus Morris Jr. added 17 points and Luke Kennard, making his first start for the Clippers this season, finished with 15.

Jusuf Nurkic had a season-high 31 points for Portland, and Norman Powell scored a season-best 29.

It was a tight game throughout. Brandon Boston Jr. hit a 3-pointer early in the fourth quarter to give the Clippers an 82-76 lead, but CJ Elleby answered with a 3 for the Blazers to keep it close.

Portland pulled to 88-86 on a pair of free throws from Powell with just under five minutes to go. After Reggie Jackson's driving layup, Nurkic sank a jumper.

George's dunk put the Clippers up 92-88 with 2:30 left. He added a pull-up jumper and, after Nurkic was assessed a flagrant foul on Isaiah Hartenstein, the Blazers couldn't get any closer. Jackson finished with 16 points.

The Clippers had lost four of their previous five games, including a 104-99 defeat at Sacramento on Saturday.

Billups praised his team for playing hard against the Clippers.

"That's what it's all about. You play hard, see what happens," Billups said. "I say this all the time: I think every team that plays hard no matter what gives themselves a chance. And we did that tonight. As shorthanded as we were, we had opportunities to win that game."

The Blazers were without All-Star guard Damian Lillard for the fourth game because of an abdomen injury. Backup point guard Anfernee Simons was out because of a sprained right ankle.

Star guard CJ McCollum was a game-time decision but did not play because of a rib contusion.

The Clippers led for most of the opening half, but Nurkic hit a 3-pointer that tied the game at 36 and Portland pulled ahead on Powell's pull-up jumper.

Dennis Smith Jr.'s 3-pointer gave the Blazers a 49-48 edge going into halftime. It was just Smith's second start of the season.

George's layup gave the Clippers a 77-72 lead late in the third quarter. Los Angeles was unable to stretch it to double digits until the final moments of the game.

"Playing out of the post makes things a little easier because for a second there I have a chance to make a quick play before the double team comes," George said. "It gives me a chance to play 1-on-1 from that position."

Clippers: Billups was an assistant under Lue last season. ... It was the last of four meetings with the Blazers this season. Los Angeles went 3-1.

Trail Blazers: Adding to Portland's woes, Nurkic was called for two fouls before the midway point of the opening quarter and headed to the bench, where he stomped his feet in frustration. ... Powell led all scorers at halftime with 18 points. ... Ben McLemore exited with left hip pain.

USE THE FORCE, LUKE

George singled out Kennard's performance in a starting role.

"He's a floor spacer and he can be instant offense, especially when he gets hot," George said. "He's another guy who can create opportunities with his shooting. It's good to have him out there and I thought he did a great job tonight."

The Clippers host the Boston Celtics on Wednesday night.