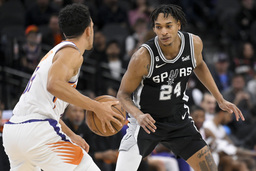 San Antonio fell behind by 30 points in the second quarter and is now two losses shy of the franchise's worst skid set in 1989.

Devin Booker and Mikal Bridges each had 20 points to help Western Conference-leading Phoenix win for the seventh time in eight games.

"Just reading the defense and taking what the defense gives us," Booker said. "Everybody shares the ball on this team. They threw a lot of blitzes and different type of defenses out there. Just get off the ball. The ball always moves faster than the defender."

Keldon Johnson has 27 points for the Spurs, who have not won since Nov. 11. Devin Vassell added 14 points and Keita Bates-Diop had 12.

San Antonio was without coach Gregg Popovich for the second straight game with what the team termed a minor medical procedure. Popovich is expected to return Thursday in a home game against Houston.

Popovich is not texting San Antonio assistant coach Brett Brown with coaching advice during his absence.

"It hasn't gotten to that," Brown said earlier.

Not that it would have helped the beleaguered Spurs against the Suns.

The matchup went as expected between the Western Conference's best record and its worst.

San Antonio's 11 points in the second quarter were a season low for any period. The Spurs committed seven turnovers and were 5 for 20 from the field in the period.

"It's just that we got beat on the first line of our defense. We had to rotate, and we didn't have that second piece to the puzzle of one more rotation. Our front door was way to open," he said.

Dario Saric added a season-high 17 points in his second start this season.

Ayton and Saric combined to shoot 16 for 22 from the field along with 13 rebounds.

"I think today's NBA is usually four guards and one big and switching, a lot of switching," Saric said. "You don't change the defensive tactics all the time, but you need the two bigs down the stretch."

Suns: PG Chris Paul missed his 13th straight game with a sore right heel. . Bridges was 6 for 7 on 3-pointers, matching a career high for 3s. . F Torrey Craig missed the game with a strained right groin.

Spurs: Hall of Fame forward Tim Duncan was honored during the first half as part of San Antonio's 50th anniversary celebration. Duncan surprised the crowd with an appearance after highlights were shown of his 19-year career, including his five NBA championships with the Spurs.

Suns: At Dallas on Monday night.