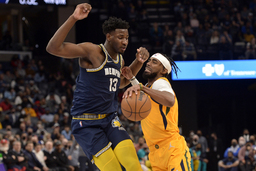 MEMPHIS, Tenn. (AP) Ja Morant had 30 points, 10 rebounds and 10 assists as the Memphis Grizzlies pulled away in the fourth quarter to beat the Utah Jazz 119-109 on Friday night.

It was the highest-scoring triple-double in franchise history and the fourth overall for Morant, Memphis' third-year point guard who was named an All-Star starter on Thursday. He scored at least 30 points for the fifth consecutive game.

"I think the win was more important, but I guess the triple-double was needed to get the win," Morant said. "All in all, it was a good night."

Morant hit Clarke for several alley-oops in the third quarter as Memphis extended its lead.

"(Clarke) is super athletic," Morant said. "All I know is if I'm on a break and he's running that wing, it's pretty much just try to make the defender commit to the ball and just throw it in the air. I know he'll go get it."

Danuel House Jr., on his second 10-day contract, led the short-handed Jazz with 21 points, while Mike Conley finished with 15 points and six assists. Bojan Bogdanovic and Jordan Clarkson had 13 points each for Utah, which lost its fourth straight and 10th of 12.

"We're playing with much a more urgent mindset," Conley said. "Playing harder. Guys are giving everything we've got with who we've got out there. At some point, we're going to break through. Things are going to start falling our way.

"We feel like we are getting closer and closer to being back to who we are."

The Grizzlies maintained their hold on third place in the Western Conference, moving 3 1/2 games in front of the fourth-place Jazz.

Memphis led by as many as 14 points before its advantage began evaporating midway through the fourth quarter. The Jazz moved within 105-101 when Royce O'Neale connected on a 3-pointer with 4:40 left.

But Utah got no closer as Memphis built its lead back to double digits.

"We competed our tails off," Jazz coach Quin Snyder said. "There was a lot of size on the floor, and we didn't have a lot of it. We battled. ... We're right there. And that was after being down double digits at various times. These guys are leaving it out there, and that's what we want to do.

"That's going to help us get better. And when guys come back, they have to be just as competitive. We played like a hungry team."

Conley played his first 12 seasons for Memphis and has seen noticeable improvement in the Grizzlies since last season, when Utah eliminated Memphis 4-1 in the opening round of the playoffs.

"I think maturity is playing a part in it," Conley said. "I think them getting a taste of what it's like to play at that level, allowed them to go into the summer understanding what they needed to do in order to be back and competitive in that nature. ... They're for real, and they're going to be a tough team."

Jazz: Four years after leaving Memphis, Conley still is beloved in the city. After the fans cheered Conley during introductions, they immediately resorted to boos for Joe Ingles. ... Mitchell missed his sixth straight game and Gobert his third.

Grizzlies: Jackson also had six blocks against San Antonio on Wednesday and has 45 over his last 11 games. ... Memphis hadn't won a home game over the Jazz since Jan. 15, 2019. ... A video celebrating Morant's first All-Star selection drew a standing ovation during the first timeout.

Jazz: At Minnesota on Sunday.