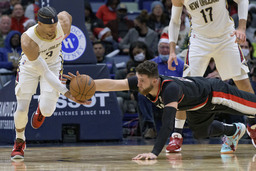 NEW ORLEANS (AP) Brandon Ingram had 28 points, Nickeil Alexander-Walker scored 22 of his 27 in the second half and the New Orleans Pelicans beat the Portland Trail Blazers 111-97 on Tuesday night for their first three-game winning streak of the season.

Josh Hart scored 20 points and Willy Hernangomez added 13 for the Pelicans, who shot 52.5% while winning for the eighth time in 13 games following a 3-16 start - all while awaiting the return of All-Star forward Zion Williamsons from an offseason foot injury.

The season "was rough at the beginning and it was challenging even on me to stay patient," first-year coach Willie Green said. "We didn't get the results initially, but I think now the guys are believing more and more and I'm extremely proud of what we're doing."

Damian Lillard scored 39 for Portland, which won its previous two games. Jusuf Nurkic added 17 points and Norman Powell had 16 for the Blazers, who were down just 92-91 after Lillard drained a long 3-pointer in the middle of the fourth quarter.

"We've got so many injuries - guys out, guys playing that aren't fully healthy; we're just trying to find our way, keep our heads above water," Lillard said, alluding to the absence of C.J. McCollum (lung) and the fact that both he (hamstring) and Nurkic (ribs) were both questionable entering the game.

The Pelicans are "not a piece of cake," Lillard added. "We're in the end of this road trip. We knew it was going to be a competitive, tough game. Who are we to expect to come here and walk through anybody? So, we gave ourselves a chance."

The Pelicans began to pull away for good when Ingram hit a 20-foot jumper, Alexander-Walker added the fifth of his six 3s and Hart finished a driving layup to make it 99-91.

"We answered adversity very well," Hart said. "B.I. really did a great job. Nickeil made some big shots and we were able to finish the game. That was the biggest thing for us and a big thing in terms of growing."

Neither team led by more than six in a first half that ended in a crowd-stirring exchange of baskets by Ingram and Lillard.

It began with Ingram's soaring two-handed jam on a baseline drive, followed by Lilard's explosive driving layup. Ingram answered with a 3. Lillard came right back with a right-wing 3 of his own before Ingram hit another 3 from the left wing to give the Pelicans a 51-49 halftime lead.

The Pelicans opened a 13-point lead in the third quarter, when Ingram's driving dunk and 3s by Hart and rookie Herbert Jones highlighted a 14-0 run. But 3s on consecutive Portland possessions by Powell and Larry Nance Jr. helped the Blazers trim the deficit.

Lillard added a 3 and a driving floater late in the period to cut it to 79-78 before Alexander-Walker beat the horn with a fall-away to give New Orleans a three-point lead heading to the fourth.

Trail Blazers: Lillard eclipsed 20 points for the 20th time this season and surpassed 30 for the sixth time. ... Nance finished with 10 points. ... Lillard hit 6 of 11 from deep and the rest of the team went 7 of 23 from 3. ... Lillard was assessed two technical fouls late in the fourth quarter, the second resulting in his ejection with only one second left. But Lillard said he only questioned a call while following an official toward the scorer's table and did not feel he behaved aggressively.

Pelicans: Jonas Valanciunas had 10 points and 16 rebounds, and Devonte' Graham added 10 points. ... Outscored Portland in the paint 48-38. ... Before the game, New Orleans signed guard Jared Harper to a two-way contract and waived two-way player Daulton Hommes. Harper had been playing with the Pelicans' G-League affiliate, the Birmingham Squadron.

"One of the things I was thinking is: Don't shoot it if it's not there. Don't do the heat check if it's not there. This is a tight game. We need this one. Do what needs to be done to get the win," Alexander-Walker said of his thought process during the game.

"For me it's just about not getting into the moment, I think, because when you ride that moment it will keep you from doing what's right," Alexander-Walker added. "I can't just shoot it just to shoot it. I've got to make the right play, and I think that's the only thing that was going through my mind."

Trail Blazers: Host the Brooklyn Nets on Thursday in the first of three straight home games.

Pelicans: Visit the Orlando Magic on Thursday night in the first of two consecutive road games.