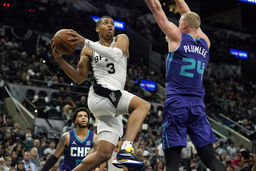 SAN ANTONIO (AP) Charlotte is finally getting healthy, and Gordon Hayward celebrated by leading the Hornets to one of their strongest performances of the season.

Hayward scored a season-high 41 points and the Hornets never trailed in a 131-115 victory over the San Antonio Spurs on Wednesday night.

"He's special," Hornets coach James Borrego said. "When he's aggressive like that, when he plays with that fearless spirit, he's a different player. He makes us go in a lot of ways. I'm really proud of him. I'm really happy for him. He's been waiting for a breakout game like this. It's been brewing."

Charlotte had five players, including LaMelo Ball, miss time this month due to the league's health and safety protocols. Mason Plumlee and Jalen McDaniels returned Wednesday, and Ball could be back Friday.

A return to regular rotations and added depth fueled the Hornets.

Hayward was 15 for 19 from the field and matched a season-high with five 3-pointers on six attempts. He played 29 minutes through the first three quarters and sat out the fourth as Charlotte's lead swelled to 30 points.

"I think it took a toll on him having these guys out," Borrego said. "He was playing 40-plus minutes, handling the ball, but he was thrilled to do it. He was like, I love it. I want to continue that spirit."

Cody Martin scored 21 points and Miles Bridges had 19 for Charlotte, which won for the third time in nine games.

Bryn Forbes scored 25 points and Keldon Johnson 21 for San Antonio, which closed a five-game homestand at 3-2.

Charlotte entered the game as the league's second-highest scoring team, and increased that output even without Ball, who was cleared Tuesday after missing five games.

"We just have so many weapons on the team," Hayward said. "So many guys can attack. When you get in the paint, and you're looking to pass and get an open shot for somebody else, it just makes us really hard to guard us. We did a really good job of that in the first quarter."

The Hornets shot 60% from the field, including 53% on 3-pointers. Charlotte had 33 assists.

San Antonio had six players score in double figures, but couldn't keep up with Charlotte.

The Hornets raced to a 25-13 lead, shooting 71% from the field and not committing a turnover in the opening six minutes.

Charlotte created open jumpers, especially 3-pointers, by whipping the ball around the court before the Spurs could close on the passes.

"That was a main emphasis for us going into the game, just sharing the ball," Martin said. "Just making sure it wasn't stagnant."

The Spurs rallied, closing within nine points in the second quarter before the Hornets rebuilt a double-digit lead and rolled to their eighth road victory.

Hornets: At Portland on Friday.

Spurs: At Utah on Friday.