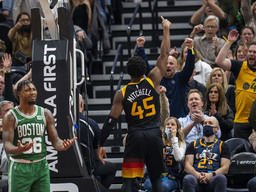 Utah made a season-high 27 3-pointers and shot 53% from long distance. It helped the Jazz survive a 52% shooting performance by the Celtics.

"It feels good to get that win," Gobert said. "We could have broke down and stopped playing the right way mentally. But we kept moving the ball, we kept attacking, we kept trusting one another. It's a huge win for us."

It wasn't enough to overcome Utah's sizzling shooting. The Jazz are the first team to hit 20 or more 3-pointers against the Celtics this season.

"I've never been a part of a team hitting that many 3s like that," Horford said. "And especially the type of 3s - they weren't necessarily all open. They were tough, contested 3s."

Tatum made a layup and two free throws to get Boston within three in the final minute. Mitchell hit a stepback 3-pointer with 28.2 seconds left to stave off a comeback.

The Jazz closed out the game by making nine of their final 11 shots.

"This comes from preparation," Mitchell said. "I got to give Coach (Quin Snyder) credit for that."

Conley made three 3-pointers to fuel a game-opening 14-2 run for the Jazz. It set the stage for a first-quarter when Utah made nine 3-pointers and shot 12 of 18 from the field overall.

Boston trimmed the deficit to 30-23 on a steal and dunk from Josh Richardson. Jordan Clarkson answered with back-to-back baskets to boost Utah's lead back to double digits.

The Jazz staked out a game-high 43-29 lead in the second quarter on a dunk from Gobert. Then, the Celtics rallied. Boston ripped off an 11-0 run punctuated by back-to-back baskets from Tatum and Schroder to cut Utah's lead to 43-40.

Horford scored five baskets in the second quarter to keep the Jazz from pulling away again before halftime. His final one, a driving hook shot, pulled the Celtics within 57-56.

After trailing the entire first half, Boston took its first lead at 73-71 in the third quarter on a reverse layup from Marcus Smart.

Celtics: Jaylen Brown did not play (right hamstring tightness). ... Smart had four steals, giving him 750 for his career. . Boston totaled a season-high 41 points in the third quarter.

Jazz: Royce O'Neale returned to action after missing two games with a right foot sprain. O'Neale finished with 12 points, 10 rebounds, and five assists. ... Utah scored a season-high 38 points in the first quarter and a season-high 41 in the third quarter.

Utah gave up 21 points on 12 turnovers in the first half. It gave Boston new life after the Jazz threatened to break the game wide open early in the first quarter.

Things improved in that department as the second half progressed. Utah did not commit a turnover over the final 5 1/2 minutes.

"Our defense took a step up and, offensively, we recognized some situations where they were trying to switch people out in pick and roll and did a good job of reacting," Snyder said.

The Celtics relied heavily on three guard lineups with Horford playing center to give them a little more offensive versatility to counteract Gobert's rim protection. It worked well, offensively. Boston scored 30 or more points in each of the final three quarters.

"We wanted to force their hand a little bit with how they were guarding," Celtics coach Ime Udoka said. "Gobert was controlling the paint. Wanted to put him against some guys like Al and Grant (Williams) who space the floor a little bit better obviously, taking him away from the rim."