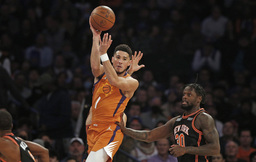 NEW YORK (AP) The Phoenix Suns are taking a 15-game winning streak to Brooklyn for a showdown with the Nets.

It feels like a big game - just not to the surging Suns.

"We do it one at a time. We know we have a tough opponent tomorrow that's been waiting on us, well-rested," All-Star guard Devin Booker said. "So, we just have to come in with the same mentality, play the type of basketball that we do, defend at high level, put ourselves in good shape to get it done."

Booker scored 32 points and the Suns beat the New York Knicks 118-97 on Friday night to match the second-longest winning streak in franchise history.

Chris Paul had 14 points and 10 assists for the Suns, who improved to 16-3. The reigning Western Conference champions will try to wrap up a perfect four-game trip Saturday against the Eastern Conference leaders.

"When you been in the league a long time, this ain't a playoff game tomorrow," Paul said. "It's good for us to go out there and compete . We're just trying to build. It's not about winning a game in November."

Phoenix also won 15 straight during the 2006-07 season. The Suns won a franchise-best 17 in a row later that season.

Deandre Ayton finished with 14 points and 13 rebounds. Booker was 14 for 27 from the field, making four 3-pointers. He did not attempt a free throw.

The Suns had to work hard to pull out victories in San Antonio and Cleveland to start the trip, but were in control most of the way at Madison Square Garden. They were ahead for the final three quarters and led by as much as 24 points.

Kemba Walker scored 17 points for the Knicks, who have lost seven straight games to the Phoenix since beating them twice during the 2017-18 season.

Phoenix has a pair of nationally televised showdowns against the Nets and then at home against Golden State on Tuesday.

Suns coach Monty Williams knows his team is well aware of the marquee matchups that are coming up, but stressed the importance of focusing on the present and not looking past any opponent.

"You know it's a long season," Williams said. "You understand that every NBA team can give you trouble. For me, I can't look to Golden State. I am thinking about tomorrow. But I am sure the guys do that and you naturally do it and then you focus on the next right thing that you have to do. There is so much parity in the league right now, that you can't walk into a game and say, `I got this.' You're going to get clipped."

Suns: Remain in New York and visit Brooklyn on Saturday.

Knicks: Visit the Atlanta Hawks on Saturday night. It's the first meeting between the teams since Game 5 of the playoffs last season when the Hawks eliminated the Knicks.