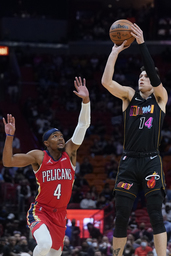 MIAMI (AP) Jimmy Butler had a triple-double in his return from a sprained right ankle, finishing with 31 points, 10 rebounds and 10 assists in the Miami Heat's 113-98 victory over the New Orleans Pelicans on Wednesday night.

With Miami without starters Bam Adebayo (bruised left knee) and Kyle Lowry (rest), Butler shot 10 of 12 from the field and made 10 of 12 free throws after missing the previous three games.

The Heat shook off a rough start and outscored Pelicans 68-46 in the second half.

"We obviously were not defending in the first quarter in the way we're capable of and that's not taking any anything away from them," Miami coach Erik Spoelstra said.

Tyler Herro scored 17 of his 19 points in the second half, and Max Strus added 15 points for the Heat. Herro also hit three 3-pointers, including a mid-court pass intended for Butler that landed inside the rim.

"I tried to throw a pass to Jimmy and I guess it was a little too strong and it went in," Herro said. "It was crazy."

Nickeil Alexander-Walker scored 24 points, Brandon Ingram added 19 points and Josh Hart finished with 18 points for the Pelicans. They are 2-14.

Miami overcame two 15-point deficits in the first half and took the lead for good on a 16-5 run that ended the third period. Herro's two free throws with 22 seconds capped the surge and put Miami ahead 81-70.

"We didn't start off the way we wanted to start off," Butler said. "I think we thought this was going to be handed to us. But we corrected it."

After converting 6-of-13 3-pointers in the first period, New Orleans shot 4 of 22 from beyond the arc the final three quarters.

"I just thought we got stagnant, especially after the first quarter," Pelicans coach Willie Green said. "First quarter we were running, we were moving the ball, we were playing with pace. Once the game slows down, it is very difficult for us."

Pelicans: Zion Williamson (foot) missed his 22nd consecutive game going back to last season but has been cleared for some contact work. "There is still some work to do in front of him, but it's definitely light at the end of the tunnel," Green said. ... The Pelicans play three of their next four games at home. ... Only one season - 2004-05 - saw the Pelicans off to a worse 16-game start than this season. They were 1-15 that season, back when the franchise was called the Hornets.

Duncan Robinson appeared in his 162nd consecutive regular-season game, giving him outright possession of second place on the Heat list in that department. Only Glen Rice, with a 174-game streak, has more consecutive appearances in Heat history. Robinson could tie Rice's mark Dec. 11 at home against Chicago and break the mark two nights later in Cleveland. The 162-game streak does not include 25 playoff appearances during that span.

Green and Heat center Dewayne Dedmon were teammates in Orlando in 2014-15, Green's final season as a player. They appeared together in 36 games for the Magic that season. Also on that team: injured Heat guard Victor Oladipo, who shared the court with Green at times in 43 games that season.