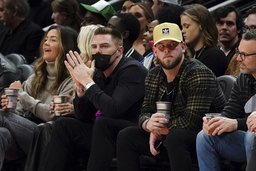 ATLANTA (AP) Jordan Clarkson was coming off one of his worst games.

His teammates told him to keep shooting.

That confidence sure paid off on a night when the Utah Jazz didn't have their leading scorer.

Clarkson scored 30 points and the Jazz blew away the Atlanta Hawks in the fourth quarter for a 116-98 victory Thursday night despite the absence of Donovan Mitchell.

Mitchell did not dress because of a sprained right ankle, but last season's NBA Sixth Man of the Year winner got hot at just the right time to give the Jazz their eighth victory in nine games.

It was tight through the first three quarters, with the Jazz heading to the final period up 75-74. But Utah blew away the home team in the final 12 minutes, knocking down eight 3-pointers while hitting 13 of their final 22 shots.

Clarkson was coming off a miserable game Tuesday night, going 0 for 11 from 3-point range and 1 of 13 overall to finish with just two points in a victory over Sacramento.

It was his second straight game without a 3 after making at least one from long range in 99 consecutive games.

It took another half to finally break out of his slump. Clarkson missed five more 3-pointers over the first two quarters, stretching his drought beyond the arc to 23 consecutive shots.

Finally, just past the midway point of the third period, Clarkson pulled up from 27 feet and got one to drop. He kept right on firing and made three more 3-pointers, finishing with a season high in points on 10-of-19 shooting.

"We know how aggressive he is coming off the bench," said Joe Ingles, who started in place of Mitchell. "We expect him to do that every night."

Trae Young scored 21 points for the Hawks, who shot just 42.7% from the field, including 7 of 28 on 3-pointers. It was Atlanta's first loss in four games at State Farm Arena this season.

After an unexpected to run to the Eastern Conference finals, the Hawks are off to a sluggish start.

Coach Nate McMillan was livid at his team after the Jazz scored 77 points in the second half - even without Mitchell.

"We need a spark," McMillan said. "We need some guys that will go out there and defend."

Mitchell was a surprise scratch. He injured the ankle in closing seconds of the first half against the Kings but returned to finish with a season-high 36 points.

Mitchell insisted the injury wasn't serious or related to a severe ankle sprain last season that caused him to miss the final 16 games of the regular season and the playoff opener.

But the Jazz were taking no chances. Ingles filled in just fine with a 5-of-6 showing from outside the stripe and 19 points.

Jazz: Bojan Bogdanovic scored 23 points. ... Rudy Gobert had 15 rebounds to go along with 13 points, helping the Jazz dominate the boards 47-32. ... Mike Conley dished out 11 assists. ... Utah outscored the Hawks by 29 points during the 31 minutes when Clarkson was on the court.

Hawks: Have lost four of their last five to slip 4-5 on the season, the first time they've been below .500. ... After a strong start to the season, Cam Reddish has scored just six points in the last two games on 2 of 12 shooting - including 0 for 6 from the 3-point line.

The Hawks paid tribute to the World Series champion Atlanta Braves during the break between the first and second quarters.

Braves players Freddie Freeman, Joc Pederson and A.J. Minter were sitting courtside, Pederson was wearing a Hawks jersey and the strand of pearls he made fashionable during the Braves' improbable run to the championship.

A parade is planned Friday to honor the team. Pederson grabbed a mic and spoke briefly to the crowd.

"We love you guys," he said. "We can't wait to see you tomorrow at the parade. Go Hawks!"

Jazz: Travel to Miami to face the Heat on Saturday in the second of three straight road games.

Hawks: Begin a four-game Western road trip against the Phoenix Suns on Saturday.