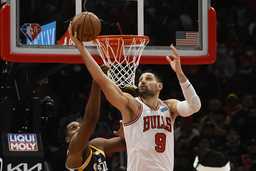 CHICAGO (AP) The Chicago Bulls came into the season with their sights set on making a jump in the Eastern Conference and getting into the playoffs.

Performances like this show just how serious they are.

"We go out there and play extremely hard for one another," DeRozan said. "Definitely be hard on ourselves when things don't go our way, especially defensively. ... No matter who we're playing, we're going to go out there and try to execute to the best of our abilities."

The Bulls grabbed a 17-point lead in the fourth quarter and hung on after the Jazz pulled within five in the closing minutes.

Utah's Donovan Mitchell hit two free throws to cut it to 100-95 with 1:39 remaining. But Nikola Vucevic came through with two huge baskets to help Chicago knock off the NBA's lone remaining unbeaten team.

The two-time All-Star answered Mitchell's free throws with a 3-pointer. And after Rudy Gobert scored on a reverse, Vucevic drove for a layup to make it 105-97 with just under a minute remaining.

LaVine, playing with a torn ligament in his left thumb, scored eight in the fourth quarter. Vucevic finished with 16 points - despite shooting 4 of 19 - and 12 rebounds, and the Bulls (5-1) bounced back from a one-point loss to New York two nights earlier.

"You're trying to build out an identity of how you want to play," coach Billy Donovan said. "This was the most consistent game I thought we've played to an identity. I thought we ran consistently."

Mitchell scored 30, though he shot just 9 of 27 while committing six turnovers. Gobert added 17 points and 19 rebounds. But the Jazz lost after winning their first four games.

"Tonight, we were just reckless with the ball," Mitchell said. "I think just mental mistakes played into a lot of it. When we got into our stuff, it looked good and it looked fluid. But I think the biggest thing is just being able to play through the pressure - physical pressure, I mean."

The Bulls bridged the third and fourth quarters with an 18-5 run to turn a four-point game into a 94-77 edge.

A three-point play by Utah's Jordan Clarkson momentarily halted the momentum. But Mitchell got called for a technical after missing a layup. LaVine hit the free throw, then nailed a 3 and cut backdoor for an alley-oop dunk off a feed from Lonzo Ball that made it 94-77 with 6:50 left.

Though he credited LaVine for playing through his injury, Donovan said his star is not his usual self. LaVine, meanwhile, said he plans to keep playing as long as he is medically cleared.

Jazz: The Jazz shot just 38% and made 11 of 38 3-pointers. ... Clarkson scored 16, though he was just 5 of 19 from the field. ... The Jazz opted to hold out Conley with the team visiting defending champion Milwaukee on Sunday.

Bulls: Chicago was 5 of 21 on 3s. ... Donovan said F Patrick Williams was "still probably a little bit shocked" that he will miss four to six months because of torn ligaments in his left wrist. The No. 4 overall pick in the 2020 draft, he will need surgery to repair the injury sustained Thursday against the New York Knicks. Williams' injury is another blow for a team already down one important young player, with G Coby White - the No. 7 pick in 2019 - recovering from offseason shoulder surgery. "I think their development, especially with a veteran group, would have been real important," Donovan said.