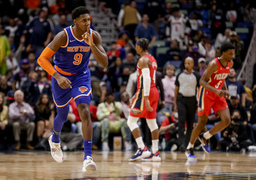 NEW ORLEANS (AP) What R.J. Barrett liked most about his career-best scoring night was the way it ended.

Barrett made two of his career-high six 3-pointers in the final two minutes to finish with 35 points, and the New York Knicks beat the New Orleans Pelicans 123-117 on Saturday night for their fifth victory in six games to start the season.

"It was fun of course - especially the type of game that that was," said Barrett, who has led the Knicks in scoring in each of their past two games, both victories.

The Pelicans "really made a push; it came down to the end of the game," Barrett continued. "So, it was definitely cool to have a career high. But, you know, I'm really happy we got the win."

Evan Fournier hit five from deep and scored 19, and Kemba Walker made four 3s and also scored 19 for the Knicks, who never trailed and led from the time Walker hit from long range 16 seconds after the opening tip.

"We're just playing with good flow and going with what's in front of us," Fournier said. "Tonight, it was R.J. that made shots and we kept going to him."

The Knicks went 19 of 33 (57.6%) from 3-point range, the difference in a game that saw the teams relatively even in many other statistical categories. New Orleans, which has opened the season with six losses in seven games, made 11 of 33 (33.3%) from deep.

The Pelicans were already having trouble early this season creating consistent offense without star power forward Zion Williamson, who is working his way back from offseason foot surgery. Against New York, Brandon Ingram, another of New Orleans' top scorers, was ruled out before tip-off with a right hip contusion.

New Orleans still found a way to remain competitive until the final minutes.

"We're learning from every single game. I still feel in my heart that we're getting better and things will turn around," Pelicans first-year coach Willie Green said. "We're right there. We're fighting. We're knocking on the door."

But that's when Barrett, now thriving in his third pro season, closed out the game while Williamson, his old Duke teammate, could only watch from New Orleans' bench.

Barrett hit a 3, and the Pelicans briefly responded when Graham hit a floater off the glass as he was fouled and fell to the court.

But Barrett then fed Taj Gibson for a cutting dunk and followed up that clutch assist with a pull-up 3 to make it 119-112 with 44 seconds left.

"I was just kind of reading the defense," Barrett said. "I know that I'm the type of player that can have nights like that and I'm happy I was able to show that today."

The Knicks built their first double-digit lead less than three minutes into the game when back-to-back 3s by Barrett and Julius Randle made it 14-3.

The lead ballooned to 16 in the second quarter when Alec Burks' running pull-up made it 44-28. New York still led by 16 with just under 5 minutes remaining in the half when the Pelicans began to climb back into it.

Valanciunas, who scored 18 in the first half, hit a 20-foot jumper, and Graham followed with a 3, initiating a 20-8 Pelicans run to close the quarter.

Graham added a 12-foot, running one-handed floater, Nickeil Alexander-Walker added a 3 and Josh Hart hit a layup to pull the Pelicans to 63-59 at halftime.

Barrett enjoyed playing closer for his team, but doesn't necessarily see the need to take on more of that role with this edition of the Knicks, given the scoring prowess of teammates such as Walker, Fournier and Randle.

"That's something that I've been able to do ... before getting to the league, so it's not anything that I feel is different for me," Barrett said. "But with all the guys we have on our team, it could be someone different every night. ... A big part of our team is that anybody could go and get it."