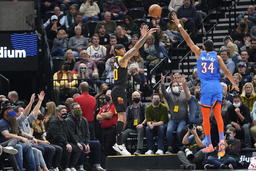 Rudy Gobert had 16 points and 21 rebounds to lead Utah to a 107-86 victory over the Oklahoma City Thunder on Wednesday night.

Utah started a bit sluggish on offense but never let up on the defensive end - holding Oklahoma City to 37% shooting from the field.

"You can't control if you make shots or not but you can control how you play defense," Gobert said. "I think if we control what we can control every night and focus on that, we're going to win a lot of games."

Shai Gilgeous-Alexander scored 18 points and Darius Bazley added 15 to lead the Thunder. Oklahoma City led only once after scoring the game's first basket.

"I thought we had decent possessions there," Thunder coach Mark Daigneault said. "This is just a team that is hard to get cracks against, and to put in a rotation. That's why they're such a good defense every year. And you really got to work to get those opportunities."

Things spiraled out of control quickly for the Thunder after they pulled within a basket, 13-11, on a 3-pointer from Luguentz Dort.

Dort's outside basket turned out to be the only field goal in a five-minute stretch for Oklahoma City. Utah took advantage of the shooting drought and opened a double-digit lead late in the first quarter. The Jazz led by as many as 11 in the quarter, going up 27-16 on back-to-back baskets from Gobert.

Clarkson kept Oklahoma City's defense on its heels during the second quarter. He tallied 10 points in the quarter and his floater gave Utah its biggest first-half lead at 43-24.

"We have five (bench) guys that can be starters on most other teams in the NBA," Bogdanovic said. "Our bench is our biggest strength."

The Thunder whittled the deficit down to 12 by halftime but drew no closer. Utah opened the third quarter with a 12-1 run bookended by 3-pointers from Donovan Mitchell to carve out a 66-43 lead. Mitchell scored 12 of his 16 points in the quarter.

Thunder: Josh Giddey collected a team-high 10 rebounds while Jeremiah Robinson-Earl finished with 10 points off the bench. Both players made their NBA debuts. . The Thunder went 3-of-26 from 3-point range in the first three quarters. They missed 17 straight 3-pointers in that stretch.

Jazz: Gobert collected 11 more rebounds than the next closest player on either team. . Hassan Whiteside collected 10 rebounds in his Jazz debut. . Utah finished with no fastbreak points.

Derrick Favors started at center for Oklahoma City in his return to Utah. Favors spent 9 1/2 seasons with the Jazz before being dealt to the Thunder in July. He finished with four points on 2-of-9 shooting and nine rebounds in his Oklahoma City debut.

Favors requested to start this specific game for what he described as "personal selfish reasons" and Daigneault honored the request.

Utah honored Favors with a video tribute between the first and second quarter and he received a standing ovation from Jazz fans. It highlighted an otherwise difficult night for him emotionally where he played against many longtime teammates.

"It was difficult," Favors said. "I was just hoping I didn't get emotional, but I've been here for so long."

Mitchell's stat line going into halftime was forgettable. The Jazz guard scored two points on 1-of-8 shooting while struggling to find a rhythm on offense.

It all changed in the third quarter. Mitchell churned out four baskets in a five-minute stretch to slam the door on any chance of a Thunder rally in the second half. Three of those baskets came from the perimeter.

"He was 1-of-8 in the first half, but he just let the game come to him," Jazz coach Quin Snyder said. "He found some stuff off the ball. Dort's a heck of a defender. There were other guys we got looks. Then, all of a sudden, people start playing those guys and other opportunities present themselves."