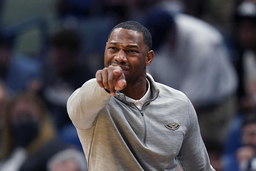 NEW ORLEANS (AP) Joel Embiid and those members of the Philadelphia 76ers who made the trip to New Orleans for their regular-season opener looked unfazed by the absence of Ben Simmons and unaffected by the drama surrounding the disgruntled All-Star guard.

Embiid had 22 points and 12 rebounds, reserve Furkan Korkmaz hit four 3-pointers in the fourth quarter to also score 22 points, and the 76ers pulled away for a 117-97 victory over the Pelicans on Wednesday night.

"We've been practicing hard," Embiid said, also noting that players who'd made the trip had enjoyed a team-bonding dinner in the city's historic Faubourg Marigny neighborhood a night earlier. "It was good to kind of get off to a good start, get a win and kind of forget about the off-the-court stuff."

A subplot to the game centered on Simmons and another All-Star who did not suit up.

New Orleans was without power forward Zion Williamson, who is recovering from surgery to repair his broken foot. Simmons was suspended one game for conduct detrimental to the team.

The Pelicans clearly could have used Williamson, who averaged 27 points per game last season.

But while fans at the Philadelphia Flyers' NHL game Wednesday night were engaging in anti-Simmons chants, the Sixers were playing well without him a little more than 1,000 miles to the south in Louisiana.

"Everybody's capable," Maxey said. "At the end of the day, basketball's a team effort. You need an entire team to be able to win.

"I felt like the focus was there from shoot-around, probably even from when we got on the plane yesterday," Maxey continued. "The chemistry is really well. Guys like playing with each other, guys like being around each other. ... Sometimes adversity makes you stronger, makes the bond closer and we got to just keep building."

Still, Green said there were a "ton of positives" that New Orleans could take for the game and said it wasn't surprising to see the Sixers, an established playoff team, close the game well.

"They've been in these moments before. They know how to win down the stretch. We'll get there," Green said. "First game for us - everything's new. These guys are learning a new system, a new way to play. ... The fourth quarter didn't go our way, but we'll get better."

New Orleans was as close as six points when Brandon Ingram's turnaround fade made it 83-77 with 9:27 left.

Korkmaz responded with his onslaught from deep, hitting three 3s in less than a minute to put the Sixers up 92-79. That was the start of a 20-2 Sixers run that included another 3 by Korkmaz, sending fans to the exits ahead of an anticlimactic final six minutes.

"I was feeling it," Korkmaz said.

Ingram finished with 25 points and Nickeil Alexander-Walker, a new starter at guard in his third NBA season, scored 23 points.

"Our focus level was zeroed into this game," Harris said. "I think it just comes from a lot of guys having added opportunity here and really trying to figure out ways that they can maximize that type of opportunity."

Pelicans: New center Jonas Valanciunas made his New Orleans debut on the same day he signed a two-year extension for a reported $30 million. He had nine points and 11 rebounds, but missed 16 of 19 shots. ... Forward Josh Hart, who opened the season as a starter in a lineup reshuffled to account for the absence of Williamson, left the game in the first half with a right knee injury and did not return.

76ers: Play their home opener against Brooklyn on Friday night.

Pelicans: Visit Chicago on Friday night for the first of three road games in four nights.