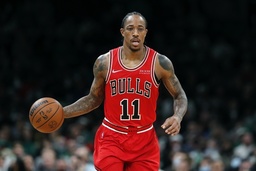 The Chicago Bulls finish up a five-game road trip with the hope of making it a winning one, but it won't be easy.

However, this isn't the same Chicago team that has come to Colorado in recent history. The additions of Alex Caruso, Lonzo Ball and DeMar DeRozan -- as well as the continue ascent of Zach LaVine -- have made Chicago a formidable opponent.

The Bulls will need everyone if they are going to stop a 13-game losing streak in Denver and a nine-game overall losing streak to the Nuggets. The last time they beat Denver was Dec. 2, 2015.

The current Chicago team, led by LaVine and DeRozan, has been a surprise to some in the Eastern Conference.

DeRozan is 32 and should be starting to decline, but he is averaging 26.6 points a game -- the most since he averaged 27.3 for Toronto in 2016-17. DeRozan is motivated to quiet critics.

"People saying I was washed up the last few years, the narrative of (I) won't fit (with the Bulls)," DeRozan said. "I can find all types of chips that I use that are my motivation. The hours I put in during the offseason. I can go down the list. Just being counted out, being looked over -- so many chips on my shoulder that I carry."

He has been impressive on the current road trip, scoring 35 and 38 in back-to-back games against the Clippers and Lakers in Los Angeles.

DeRozan's play has helped make up for the absence of Nikola Vucevic, who is away from the team after testing positive for COVID-19.

The Bulls will face a Denver team that is playing a second consecutive night and has lost two straight, including a 103-89 setback to the Philadelphia 76ers on Thursday.

The Nuggets had won five straight before losing at Dallas on Monday night, and the defeat to the Sixers ended a six-game home winning streak.

Denver has been one of the better defensive teams this season but in the past two games has allowed an average of 107 points. On Thursday night, the Nuggets' bench, which has played better after a rough start, was ineffective. Denver led by one early in the second quarter but fell behind by double digits with the reserves in and never recovered.

Add to those injury woes the fact that Monte Morris has been dealing with a leg injury for a few weeks. He said Wednesday he is feeling better and is able to do more in practice.

"I've been getting treatment and just playing in games. I'm starting to feel better," said Morris, who has not missed a game this season. "Been able to play without pain and stuff like that."