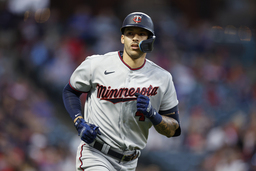 Correa was one of nine major leaguers who exercised options to join the pool of players eligible to sign this offseason with any team.

The decision was widely expected since the day Correa surprised the baseball world by signing with the Twins coming out of the lockout, in lieu of the longer-term deal he'd been seeking. Correa made $35.1 million in 2022, the highest annual average salary for an infielder in Major League Baseball history.

The Twins also announced Monday they will decline contract options on starting pitchers Chris Archer ($10 million) and Dylan Bundy ($11 million) and first baseman Miguel Sano ($14 million). They have the following buyouts: $750,000 for Archer, $1 million for Bundy and $2.75 million for Sano.

Right-hander Sonny Gray will be back in Minnesota's rotation. His $12.7 million option was exercised Monday - his 33rd birthday - for 2023. Gray had a 3.08 ERA in 24 starts after arriving in a trade with Cincinnati that sent 2021 first-round draft pick Chase Petty to the Reds. Gray had 117 strikeouts in 119 2/3 innings.

Joining Correa, Archer, Bundy and Sano on the open market after the expiration of their contracts with the Twins are relief pitcher Michael Fulmer, outfielder Billy Hamilton, catchers Sandy Leon and Gary Sanchez and starting pitcher Aaron Sanchez.

Correa strongly hinted over the final weeks of the season he would opt out. He first revealed his decision in an interview the El Nuevo Dia, a newspaper in his native Puerto Rico, published Oct. 12. But the move could not actually be made until one day after completion of the World Series, which was won Saturday by the Houston Astros, Correa's former team.

Correa, a multiskilled player at a premium position in his prime at age 28, will hit the open market for a second consecutive winter. His positive impact with the Twins on and off the field was clear, though a star player can only go so far.

After spending 108 of the 182 days in the regular season in first place, the Twins tumbled out of the AL Central lead and finished 78-84. Correa batted .291 with 22 homers and had an .834 OPS while contributing his customary strong defense.

The desire to keep Correa in Minnesota long term is clearly mutual. He raved about the organization and how comfortable his family felt in the community. The middle-market Twins will have to get creative with agent Scott Boras, though, to make it happen. Correa will draw wide interest, and the bigger-spending clubs are certain to drive up the price.

The 29-year-old Sano faded hard into a quiet and disappointing ending with the Twins, who signed him at age 16 out of the Dominican Republic in 2009. Since his debut in 2015, no major league player struck out more than Sano, with 1,042 in 694 games.

After making the All-Star team in 2017, Sano batted just .217 over the last five seasons. He had trouble staying healthy throughout his tenure with the Twins, including a knee injury this year that limited him to 20 games. He had five hits in 60 at-bats.