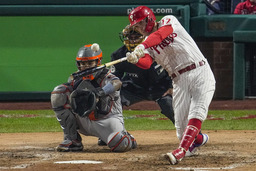 PHILADELPHIA (AP) Bryce Harper stepped off the team bus after it pulled up outside Citizens Bank Park and posed with fans for selfies - including a little kid who dressed like the Phillies slugger - and waved goodbye to the small party of fans.

With that, Harper walked away and into the offseason, one that could include surgery.

Harper's need to address a balky right elbow that turned the right fielder into a designated hitter this season is one of the top priorities for the National League champions.

Trying to figure out if the Phillies' scintillating postseason run, which ultimately fizzled against Houston in the World Series, marked the start of a sustained championship window or was simply a one-off is the other.

In one sense, the Phillies ended the season pretty much where they expected to land when spring training opened with championship aspirations.

Philadelphia spent $179 million on Kyle Schwarber and Nick Castellanos as big-bat, free-agent additions to a lineup that needed power to compete with Atlanta and the New York Mets in the NL East.

A veteran manager had been hired with the lone goal of winning a World Series. The Phillies had the reigning NL MVP in Harper and the Cy Young Award runner-up in Zack Wheeler. Owner John Middleton spent more than $230 million on a payroll of players he thought was strong enough to win the World Series. This was a team expected on opening day to reach the playoffs for the first time since 2011.

But somewhere along the way, the team turned into plucky underdogs that shocked the baseball world. The Phillies were 23-29 and 5 1/2 games out of the final NL wild-card spot in early June when they fired manager Joe Girardi and decided to ride with Philly Rob. Former bench coach Rob Thomson made all the right moves along the way - until he didn't, perhaps lifting Wheeler too soon in a Game 6 loss that ended the World Series - and earned an extension that gives the Phillies stability in the dugout. He's now charged with winning that first World Series title since 2008.

And no upbeat anthem will dull the pain if they miss out next season.

A look at what's ahead for the Phillies:

It might be hard to remember based on Harper's postseason for the ages - which saw him hit six homers and earn NLCS MVP honors - but the 30-year-old slugger played this season with a small tear in the ulnar collateral ligament of his throwing elbow. He last played the field at Miami on April 16 and could need surgery to fix the tear. Should Harper need any kind of reconstruction on his elbow, odds are he won't be ready for the start of next season. He did have a platelet-rich plasma injection in his elbow and perhaps more rest could solve the issue naturally.

Starting pitcher Aaron Nola had his team-friendly $16 million option picked up Monday night. First baseman Rhys Hoskins - who often fields the position with the ease of kids playing a game of hot potato - could hit the trade market. He batted .120 in the World Series and struck out 10 times. Hoskins had his moments - his bat spike will live in Philly sports lore - but hit .159 overall in Red October.

The Phillies declined the $17 million option on aging second baseman Jean Segura, and right-hander Zach Eflin declined his side of a mutual option and is now a free agent. The Phillies have Kyle Gibson, Brad Hand, Corey Knebel, David Robertson and Noah Syndergaard among their free agents, most of whom have played their last game for the team.

Throw in some expiring contracts that also come off the books, such as the since-departed Odubel Herrera and Didi Gregorius, and roughly $75 million in payroll is shed this winter.

Which means? Spend some stupid money, as Middleton once promised to do.

Philadelphia is sure to be aggressive this winter and could spend that cash on free agents such as Trea Turner, Xander Bogaerts, Dansby Swanson and Carlos Correa. The Phillies were strikeout- and home run-heavy in the lineup and any one of those shortstops could bring contact to the batting order.

The reality is, the Braves and Mets won 101 games apiece and the Dodgers won 111. The Phillies (87-75) can't count on getting hot in October as the pitch for their fans at winning a World Series.

Cheap, homegrown help could be on the way. Andrew Painter, Mick Abel and Griff McGarry are among the top minor league pitching prospects in the game and could be counted on at some point next season to strengthen the rotation.

"This is sustainable, this type of winning atmosphere and winning team," Thomson said. "This is a good taste to get these guys here in this moment, all these young players. We've got a good group of veteran guys, and our system is starting to get loaded up with good arms at the upper end of the minor league system. I think this run has the potential to be very sustainable."